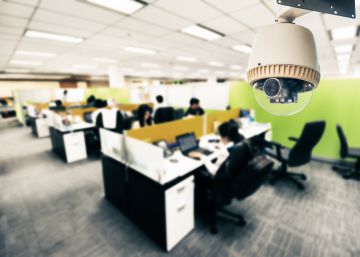 A few weeks ago, the European Court of Human Rights (ECHR) made public his sentence on the case of Mercadona employees who were recorded by hidden cameras while stealing products and money from the box. After almost a decade of litigation, the great room gave the supermarket the reason to consider that the decision to install the devices was proportional and did not attempt against the privacy of the workers. The ruling, which has been dictated in the first instance, where there was a violation of rights, extends to companies the assumptions in which video surveillance systems can be installed to control the workforce.

The use of cameras to supervise workers is one of the issues that is creating more conflicts in recent years in the workplace. So much so that the new organic data protection law (LOPD), of December 2018, expressly dedicated a precept to regulate this issue. Thus, in order for these systems to be legal, article 89 imposes on companies to inform “beforehand, and expressly, clearly and concisely to workers” of two extremes: of the presence of the cameras and, in addition, of the purpose of controlling the captured images. If this double requirement is not met, the use of the recordings will not serve, for example, to justify a dismissal.

So far the norm is clear. But nevertheless, the legislator introduced a second paragraph in article 89 that has created some confusion and resulted in a good number of contradictory sentences. This paragraph establishes that, when “the flagrant commission of an illegal act has been captured”, the duty of information is reduced and satisfied with the existence of an information device “in a sufficiently visible place”, that warns about the existence of cameras (the classic warning sign).

This reduction in workers' rights guarantees if “illegal acts” are recorded has raised suspicions of the most guaranteeing magistrates. In a ruling issued in March, a judge in Pamplona openly criticized this exception and considered that, in that section, the law violated the right to the protection of personal data and contradicted the European regulation on the matter. Therefore, he said that it could not be applied and, consequently, rejected as evidence for a dismissal the recordings that showed a security guard fighting with a partner in the company parking lot.

Does the aforementioned paragraph open to a kind of Big Brother at work? Marisa López, partner of Garrigues, rule out that both the law and the ECHR are giving companies carte blanche to monitor their workforce without any control. As he explains, the relaxation of the duty of information "is reduced to exceptional cases." "Business control can sometimes affect the privacy of employees, but such interference should be as small as possible," he says.

Ricard Martínez, privacy expert and professor at the University of Valencia, agrees with this vision. In his opinion, it makes no sense to require the company that detects an irregularity “to previously alert the offender that he is going to install a camera to monitor him”, because then he will modulate or modify his behavior, preventing the management from taking disciplinary or legal measures.

However, and as both jurists agree, it is a sensitive matter in which there is no single and clear judicial criterion. It will depend on the circumstances of each case (and the sensitivity of the judge or court) to weigh what weighs more, the right to privacy and data protection of the employee or, on the contrary, the freedom of enterprise and the ability to control Workers.

One of the big problems posed by the controversial paragraph is the indeterminacy of the concept of "illegal act." As Marisa López explains, it is not limited only to the commission of crimes (such as the theft of money or an episode of sexual harassment), "but covers behaviors that violate other laws or even the internal regulations of the company." In 2017, the Supreme Court endorsed the termination of the gym coach who skipped the organization's code of conduct by using his wristband to open the lathe for access to non-members of the premises. Likewise, the Superior Court of Justice (TSJ) of the Basque Country confirmed the suspension of 21 days of employment and salary of a bus driver who was recorded driving recklessly, an administrative infraction.

Despite the doubts that may raise the issue, Enrique Ceca, partner of Ceca Magán, insists that, far from an open bar, there are strict limitations to the use of video surveillance at work. As he recalls, in the case of Mercadona, the ECHR emphasizes the short duration of the recordings and the prior existence of reasonable suspicions (mismatches in the inventory), which reinforced the idea that an irregularity was being committed. Therefore, the lawyer recommends caution to companies that want to install these systems. They must weigh the different interests at stake and "ensure that the devices do not generate more damage to the general interest than benefits to the business interest," he concludes.

If in the context of a dispute, the worker challenges the surveillance camera system, Enrique Ceca points out that the judges will do a triple exam to assess their legality. First, they will check if their installation was suitable; that is, it served to verify the irregularity. Next, they will check if it was necessary; or put another way, that there was no other less invasive way to reach it. And, finally, they will estimate their proportionality in relation to the objective pursued. These three conditions were set by the Constitutional Court when, in 2016, it gave its approval to the dismissal of a Bershka employee to whom the cameras caught stealing money from a box. Among other reasons, the magistrates assessed that the company only focused the machine on the employee on whom there were suspicions.

The deficit goes off again with the PSOE: it closed 2019 at 3% and leaves Spain on the verge of intervention

Google knows everything about you: will it also control your health?