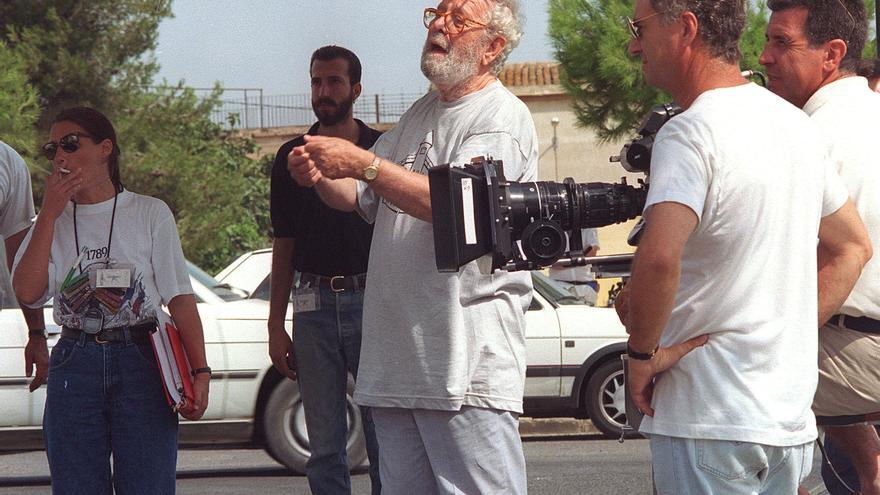 Valencia, Jun 11 (EFE) .- Luis García-Berlanga’s language is linked to his filmography, his way of being and his cultural legacy, indebted to a classical education and a lifestyle where words, and a placid way to say them, they were part of the argument and imagination with which he wanted to roll his ideas.

If the Royal Spanish Academy includes, since November 2020, the term “berlanguiano” in the Dictionary of the Spanish Language, let’s review in an alphabet some of the keys to his life and work, as rich in nuances as in interpretations.

A, by AUSTROHÚNGARO. If Hitchcock made a cameo in almost all his films, Berlanga used the term “Austro-Hungarian” -allusion to the Central European Empire (1867-1919) – in the scripts of all his films, either out of superstition, as a fetish, or as a simple element. of relaxation in the middle of a dialogue, but that has ended up being a comic icon in his work.

B by BARDEM. With Juan Antonio Bardem he directed “That Happy Couple” (1953), his first film after several shorts and episodes shot during their joint film training in Madrid. They were a key couple to understand the Spanish cinema of the 50s, although subsequent disagreements between the two – Manuel Gutiérrez Aragón argues that for political reasons – they closed a stage that left projects in the drawer, from “La huida” to the zarzuela “Bohemios”.

C by CALABUCH. The particular Vetusta de Berlanga, the cinematographic transcript with which Peñíscola (Castellón) was already baptized forever. “Calabuch” (1956) sowed magical realism (and, as in “Welcome, Mr. Marshall!”, American echoes) the then Mediterranean placidity of that town. “Paris-Timbuktu” was also filmed there and yes, it was Calabuch again.

D, of DISTINCTIONS. Berlanga enjoyed vast recognition while alive, both in Spain (especially after the Franco regime, whose regime censored titles and scripts) and in Europe (festivals such as Cannes and Venice) and the US (see W). Presiding over the National Film Library, he received the National Film Award and the Gold Medal for Fine Arts; He was honorary president of the Film Academy, Prince of Asturias Award for the Arts, achieved several Goya, was a member of the Royal Academy of Fine Arts of San Fernando and honorary doctorate in Madrid and Valencia.

E, for EROTICISM. Berlanga’s relationship with eroticism not only permeates numerous films (the most obvious, “Natural Size”, a scandal in 1974: it was classified as pornographic), but also made it clear in interviews, reflections, speeches and even in the creation of a literary award, “The vertical smile”, key to understanding both the stage of uncovering in Spain and the transition itself towards the uninhibited culture of the 80s.

F, from PARTIES. “I have always declared that my films are falleras, pyrotechnic,” Berlanga pointed out about the Valencian roots of his Mediterranean-scented cinema and that he also drank from an Alicante festive tradition, the Moors and Christians, as in the 1987 film of the same name shot in Xixona .

H, for HUMOR. His black humor, which drank from the absurdity of Valle-Inclán updated with the reality of the postwar period onwards, is one of the most visible features of a director who knew how to bring out the most human comic vision from an infinite cast: Fernando Fernán-Gómez, José Luis López-Vázquez, Concha Velasco, Luis Escobar, José Sazatornil “Saza”, Guillermo Montesinos, José Sacristán, Santiago Segura, Alfredo Landa, Agustín González, Manuel Alexandre …

I, by ISBERT. He incarnated as Don Pablo the most famous mayor of 20th century Spanish cinema, the one who from Villar del Río (see X) assumed, with some deafness, the dreams of a Castilian people for appearing Andalusian and thus achieving the economic favors that he would leave in its wake the Marshall Plan. With Berlanga Pepe Isbert managed to become an icon of postwar rural Spain, but without him “El verdugo”, “Calabuch” and “Los Thursdays, a miracle” would not have been the same either.

J, by JOSÉ LUIS GARCÍA BERLANGA. The first-born of his four children came out to his father and directed “High Barrios” and several television series. His brother Jorge co-wrote the scripts for “All in prison”, “Blasco Ibáñez” and “Paris-Timbuktu”, as well as “Viva Russia”, an unpublished project that was to be the fourth film in the Leguineche saga (see L) . Carlos, the third, was a key figure in the Movida as a musician and his death in 2002 was a blow to his father. Fernando, the youngest, is a journalist.

Contains the K, BUSTER KEATON. The American actor, screenwriter and silent film director was one of the key influences on Berlanga’s cultural childhood so that his creativity was focused on a genre that he never abandoned: “Comedy became the messenger of my ideas”, he proclaimed proudly.

L by LEGUINECHE. The family line commanded by the Marquis (Luis Escobar) starred in the trilogy shot about Francoists, decadent aristocrats and the Transition with “La escopeta nacional” (1978), “Patrimonio nacional” (1981) and “Nacional III” (1982), while the fourth script of the series, “Viva Russia”, has appeared this week in the legacy he left in 2008 in the Caja de las Letras.

M, for WOMAN. Was Berlanga a misogynist? Did he caricature women because of his mixture of fear and admiration for them? The filmmaker and academic Josefina Molina disagrees: “She portrayed with sarcasm some models of women –the eternal traditional feminine and the retrograde models imposed by Francoism– in such a way that it forced us to reflect on Spanish women themselves on the impossibility of perpetuating ourselves in those models. Through humor and grotesque, he contributed to our awareness and the transformation of this country starting with ourselves. ”

Contains the N, BUENOS AIRES. The furthest Berlanguiano filming in Spain was in Buenos Aires with “La boutique” (1967), one of his least remembered films despite the deployment of media available (including music by Piazzolla). The germ was a script with Azcona entitled “Las piranhas” (with López-Vázquez and Laly Soldevila as protagonists) but the producer demanded to shoot it in the Argentine capital and with a different partner.

Contains Ñ, SPAIN. The Valencian genius was trained in Madrid as a filmmaker and from there he drew the particular “kilometer 0” of his creativity, with shootings spread over several provinces. As a citizen of the world who felt, he wanted to portray the society of his time, with its idiosyncrasies and its miseries, its fatality and its virtues, not only from the capital of Madrid but from Mediterranean enclaves (Valencia, Castellón, Alicante, Barcelona or Mallorca) and rural (Zaragoza and Castilian towns).

Contains the O, “EVERYONE TO JAIL”. Coral a plus, with an endless cast and with corruption as a backdrop, this 1993 comedy was the only film shot entirely in his hometown, in the Modelo Prison that now, converted, houses the huge administrative complex of the Valencian generalitat.

P, from PESIMISMO. Fatality, destiny or loneliness were terms that Berlanga used everywhere. “The protagonists turn their lives, or rather, my films into chronicles of a failure,” he said when he spoke of the “traps” that society tends “sinuously” to avoid fulfilling dreams, be they individual or collective. There are plenty of examples in all his work.

Contains the Q, “LA VAQUILLA”. His great commercial success, not so critical, but the film that in 1985 opened box offices, awards and especially to a new generation of viewers through a grotesque comedy about the Civil War based on an idea written in the 1950s with Azcona (see R).

R by RAFAEL AZCONA. He was the best scriptwriter in Spanish cinema and his tandem with Berlanga left a trail of jewels of popular culture, from “Plácido” and “El verdugo” to the Leguineche trilogy, “La vaquilla” or “Moros y Cristianos”, although they could have been more if the Italian Marco Ferreri, who directed the scripts of “El pisito” and “El cochecito” had not advanced; in fact, there are those who confuse them as Berlanguian films.

Yes, from “FEEL A POOR AT HIS TABLE”. It was the title of the script that Azcona and Berlanga drew up, but the previous censorship of the time was relentless and its argument, a criticism of the hidden hypocrisy behind the charity campaigns, finally managed to premiere but under the proper name of the owner of that motorcycle, “Placid”.

With the T, ARCHITECTURE. It was the great frustrated vocation of Berlanga, who confessed that because of mathematics he could not enter the School of Architecture. But he found in the cinema the escape route for all his creativity, without giving up his fondness for the work of the Bauhaus, Frank Lloyd Wright or Le Corbusier.

Contains the U, MARÍA JESÚS MANRIQUE. Soriana, with a degree in Philosophy and Letters, married Berlanga in 1951 after a three-year courtship. They had four children (see J). They led a very family life together, exemplary for the time. “They offered me many film roles, but I was very embarrassing,” she said at 90 in a recent interview.

It contains the V, “THE EXECUTOR”. Considered almost unanimously his best film, it was again the result of a script with Azcona. He faced Franco’s stakes for the harshness of his argument but he won the affection of millions of Spaniards who saw in it the perfect film that portrayed not only a regime, but an entire society and a way of seeing life.

Contains the W, HOLLYWOOD. “Plácido” was nominated for best foreign language film at the 1962 Oscars; There, together with the producer Alfredo Matas and Amparo Soler Leal, he met Jayne Mansfield, King Vidor, William Wyler, Frank Capra or Billy Wilder. And in 1983, the US Academy of Motion Picture Arts and Sciences honored him in California with a comprehensive retrospective of his work.

Contains the X, GUADALIX DE LA SIERRA. In 1953, this Madrid town went down in history as Villar del Río (not to be confused with the real municipality of Soria), the agricultural and grayish symbol of the Spanish postwar period, which dreamed of the dollars that came from a Marshall Plan to which it gave a folkloric welcome. It went down in the annals of Spanish cinema and sparked a furious American diplomatic reaction when it premiered at Cannes.

Contains the Y, “VILLARRIBA Y VILLABAJO”. It was not just a 1994 TVE series, but a family project -inspired by the advertisement for a dishwasher- where the father and three of his children participated (José Luis and Jorge as scriptwriters and Carlos in the music). Another Berlanga television incursion was “Blasco Ibáñez”, an ambitious biography of the writer that broadcast Channel 9 in 1997 and TVE a year later.

Contains the Z, JOSÉ LUIS LÓPEZ VÁZQUEZ. It was a “fixed” for Berlanga, in whose filmography you can see him debut, mature and grow old. They shot together from the seminal “That happy couple” to “Boyfriend in sight”, “Thursdays, miracle”, “The executioner”, “Placido”, “Long live the bride and groom!”, The Leguineche trilogy, “Moros y Cristianos “and” All to jail. ”