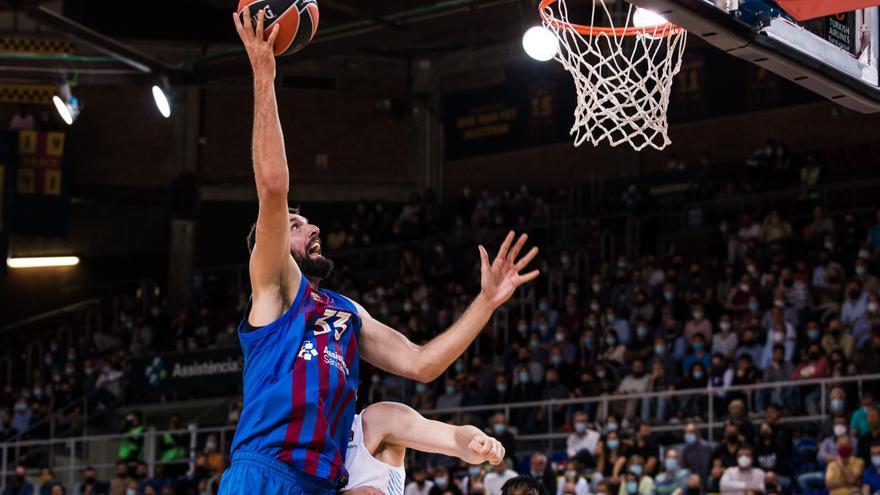 The Hispano-Montenegrin put the culmination of a great choral performance, with prominent roles for Brandon Davies and Nico Laprovittola (16 points each), also in the defense of the painting, which limited the dominant Walter Tavares (10 points) and Guerschon Yabusele (8 points), with Fabien Causeur and Thomas Heurtel being the Madrid's top scorers (11 points).

The Barça team arrived at the appointment with the losses of Nick Calathes, Cory Higgins and Álex Abrines, while in the white team the recently recovered Anthony Randolph joined as a precaution and last minute to the absences of the injured Trey Thompkins, Carlos Alocen and Alberto Abalde.

In a Palau Blaugrana, which registered the best entry of the season and in which before the opening whistle the 7,079 attendees made a mural with the colors of Barça and the Catalan flag, Real Madrid started stomping (0-6, min .3) against a Barça team supported by four points from Mirotic (4-11, min.5).

More intense in defense, Barça managed to turn the scoreboard with the contribution of an irrepressible Mirotic (13 points in the first quarter, 17 at halftime), five goals by Rokas Jokubaitis and the first basket by rookie Dante Exum (16-14, min.7), a trend that continued until the end of the period (24-19 ).

The exit to the track of the ex-Azulgrana Thomas Heurtel, much more whistled on his return to Barcelona than the former Adam Hanga, turned on the Palau while Barça escaped on the scoreboard with five points in a row from Brandon Davies, forcing Laso's time-out (31-21, min.12).

Despite the contribution of Fabien Causseur (white's top scorer at half-time with 9 points) and Heurtel in individual actions, the Barça attack was more fluid in a section of coral success, with former Madrid player Nico Laprovittola joining an infallible Davies (14 points without failure at rest).

After Laso's second time-out (43-31, min.16), Real Madrid came close with two triples from Rudy fernandez Y Sergio Llull (47-41, min.18), but Barça maintained the advantage from the free kick before the repeated complaints of the white box with the referee's criteria, which cost the bench the technique (rest, 51-42).

The defense in the painting, which reduced Tavares and Yabusele (four points and three personal fouls, and 0 points respectively in the first two quarters) and Real Madrid with a 37.5% success rate in shots of two by 70% Barça, was a key factor for Barça.

The dynamics continued after the intermission, with Real Madrid suffering to score each point and a Barça that, led in attack by Laprovittola and Mirotic, found the free shooter with ease (64-50, min.26).

The Lithuanian coach stopped the game on time, with 3.29 m. ahead, and the Barça team reacted once again driven by Mirotic, who with his points secured a victory (93-80) that places Barça as the solo leader of the Euroleague.

Incidents: Match of the fourteenth day of the Euroleague played at the Palau Blaugrana before 7,079 spectators.