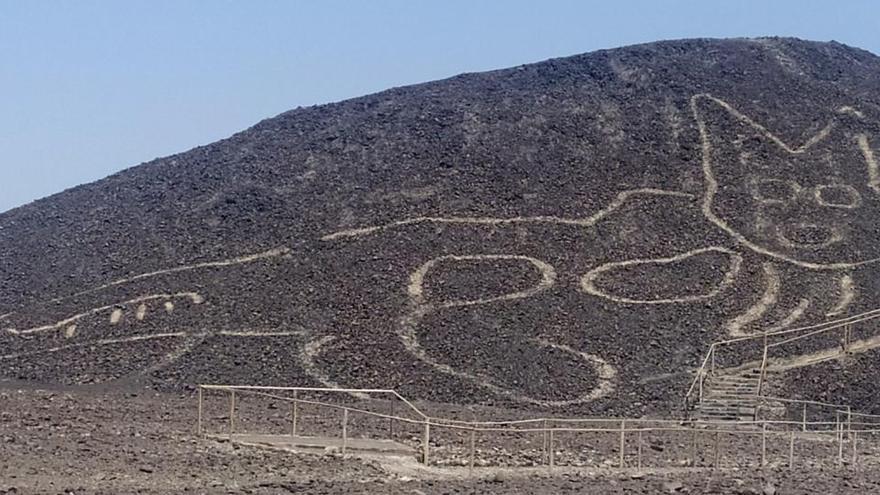 A cat about 37 meters long resting on a sandy hill is the new figure that archaeologists from the Peruvian Ministry of Culture have found in the Pampa de Nazca, home of the famous geoglyphs that are part of the list of Unesco World Heritage since 1994.

The feline was carved on the slopes of a hill in the middle of the desert of the Nazca region some two hundred years before our era, long before the appearance of the famous figures – the “monkey”, the “spider” or the “bird”– which make the area one of the places with the greatest archaeological interest in Peru, and there it remained hidden for almost 2000 years, a few meters from the Panamericana, the main highway that runs from north to south throughout the country.

The discovery occurred, according to the archaeologist told EFE Jhonny Isla, responsible for the management system of the Nazca-Palpa Archaeological Park, when the authorities decided to improve access to the main natural viewpoint that allows visitors to contemplate from the ground part of the gigantic figures that dominate the landscape of the area.

“From the Ministry of Culture we realized that access to the viewpoint, in fact, passed over a geoglyph, and we considered changing it, since it is not possible that access was promoted by damaging heritage … Another issue is that the ascent was complicated and we wanted to facilitate a safer step … And in that process, we realized that on that slope there were traces that were not in any way naturalIsla said.

Despite the obvious erosion in the area, Through photographs taken with drones, what was revealed from the beginning “looked like a zoomorphic figure, a feline”, which had been hidden from view for hundreds of years.

“It is striking that new figures can still be identified, but we know that there are others that can be found. In recent years, the use of drones, which above all allow us to take images on the slopes of the hills, has made that possible, “said the archaeologist.

The initial discovery occurred earlier this year, but due to the stoppage of activities in the country due to Covid-19, the field work has not been completed so far, revealing the figure of an animal that looks forward and sits on its side, drawn with lines about 30 centimeters thick.

Everything seems to indicate that the animal belongs to the Paracas culture, which preceded the Nazca culture by several centuries, which created the geoglyphs for which this region is known.

“In recent years, between the Palpa and Nazca valleys, some 80 or 100 new figures have been identified, which precede those of the Nazca culture. These are smaller in dimension and are drawn on hill slopes, clearly from an earlier tradition. It is known from iconographic comparisons. For example, Paracas textiles have birds, cats, or characters easily comparable to those glyphs, “explained the researcher.

In this sense, Isla pointed out that the historical and cultural interpretation of these findings is different from that of the Nazca geoglyphs, much larger and difficult to perceive with the naked eye.

“The meaning of the Nazca geoglyphs has something certain as an answer: they were linked to water and fertility. Nothing strange for a people who lived in a desert and for whom water was central (…) But these new, smaller ones, which appear in groups, because they involve a different conception: they are made for people to see them ” the archaeologist reasoned.

Thus, while the figures of the Nazca culture are made “by men, for the gods,” those of the Paracas “are of men for men,” he said.

“In any case, it is evident that this immense desert constituted a cultural landscape that was integrated and occupied by society, it was not an abandoned landscape and had a very special meaning, for hundreds of years,” Isla added.

The Nazca Lines, discovered in 1927, constitute a vast complex of zoomorphic, geometric or plant images, whose arrival in the world was possible thanks to the German-Peruvian María Reiche (1903-1998), who dedicated a large part of her life to the study and conservation of geoglyphs.