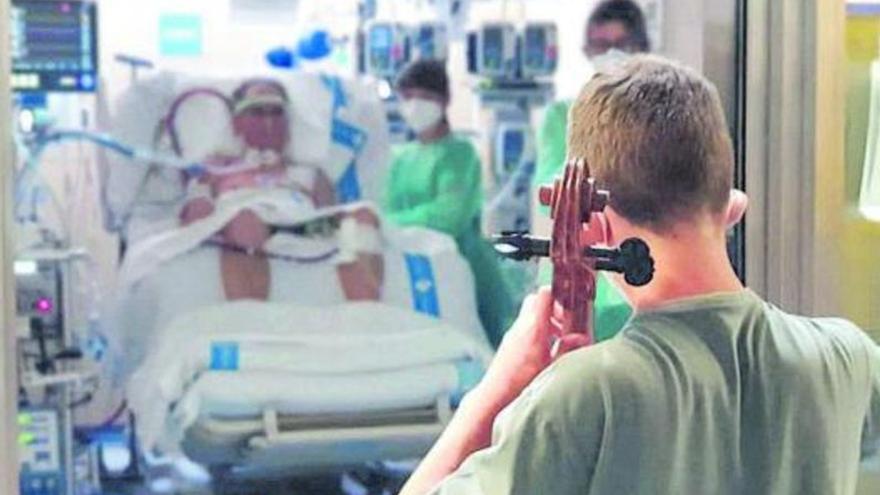 Before restricting visits as a result of the fifth wave of COVID-19, the ICU of the Vall d’Hebron Hospital hosted the cello concert that a 13-year-old boy dedicated to his father, admitted for coronavirus because of the inflammatory reaction caused by the virus.

The hospital has shared the moment through Twitter, while clarifying that a week after that moment the father could have been disconnected from the device that helped him to breathe because “his lungs are already working”, although now “he is trying to regain his muscles.”

The 13-year-old boy who has played the cello His name is Pau and he is studying his first year at the Conservatory of Badalona, ​​something that has allowed him to interpret pieces such as the Solo cello suites by Johann Sebastian Bach, the soundtrack to Pirates of the Caribbean or the Cant dels ocellsby Pau Casals.

He received permission to visit his father because the doctor had noticed him “dull and bored” for a few days and they thought that this might encourage him. They explain from the hospital that there are scientific studies that show, through neuroimaging techniques, that music can change the brain short and long term, and can help treat motor deficiencies in patients who have suffered a stroke or vascular accident.

However, what Pep, who is the name of the patient, needed was to regain the function of his lungs, since he was connected to an extracorporeal oxygenation device, a very invasive technique that performs respiratory functions when the lungs fail and is responsible for oxygenating the blood and eliminating carbon dioxide.

It is a complex therapy that is reserved for the most seriously ill of COVID-19 for whom the respirator is not enough, approximately 2% of patients.

The assistant of the intensive medicine service Carolina Maldonado says that this story is that of a serious “manual” patient, since he had to be intubated ten days after testing positive for COVID-19 by a PCR and that he did not improve after this.

“He was in a situation of refractory hypoxemia and the medical team at the Hospital General de Catalunya decided to take a next step to try to save him: connect him to ECMO therapy,” Maldonado continues. At the Vall d’Hebron ICU, he began to do physiotherapy despite the fact that he was in an induced coma until June 13, when they could wake him up.

Meritxell, Pep’s wife, remembers that “the hardest part of this whole process were the days when he was asleep” and that when they woke him up I was still connected to the ECMO machine because his lungs were still not responding, something that made Pep begin to be aware of the situation.

“I was very myopathic, I had lost a lot of muscle strength, and I knew that he was connected to a machine to be able to breathe, “says Maldonado, who adds that” he is 59 years old, he was a very athletic person with no previous pathologies, and seeing himself like this was a hard blow “.

Regarding the reunion with his son, he says it was very exciting because “they had not seen each other for two months and I could see the father in conditions with the prospect of improvement.” “The visit of his son encouraged Pep, who saw that he had a future”explains Meritxell.

A week later they were able to withdraw the ECMO support and now he is in the General Hospital of Catalonia recovering, since his lungs are working again, although he has a long way to go to regain muscle strength.