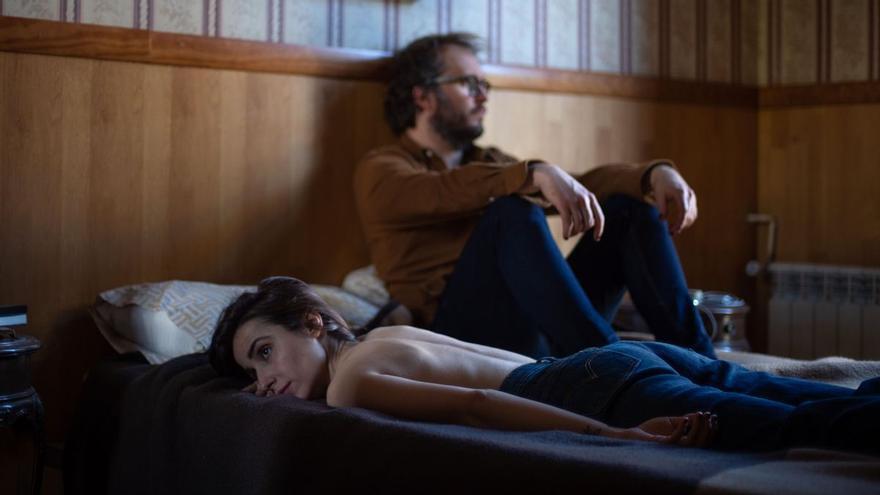 Now him Zahara’s solo project He is the one who takes over the covers these days for the imminent launch of his new album, ‘Puta’, today it’s time to talk about _juno, the project that he has created with Martí Perarnau (who is also a member of his gang, as well as head of A lot of). It is an escape, an exile for these two travelers whose alliance, which began the song ‘Today the beast dines at home’, ended with _BCN626 (2020), an intimate electronic pop album influenced by Caribou, James Holden and Pink Floyd, and that has touches of M83 and some lynchiano.

The seductive voice of the Jaén and the fine and elegant electronics of the Catalan, which share lyrics, instrumentation and interpretation in a balanced way, intertwine in something new and inescapably beautiful that in recent months has gained strength on stage.

-The _juno project was born outside the laws of the music industry market. How do you feel when there is no pressure from record companies?

-Although we dream of full freedom, being completely outside the music industry is impossible; we are born into a system and we have to give in to certain systemic precepts. Music is like life itself. However, it is true that we have been in this for many years, and when we rode _juno we did it with the idea of ​​only following our own rules. We edit our albums without the umbrella of the major labels, so all the pressure that exists is purely artistic, and it exists because we set very specific and exhaustive creative paths.

-It seems that you have not mounted _juno as an anecdote …

-We are authentic freaks of music, and every project or album that we make we do putting our whole life into it, so the idea of ​​setting up a project like _juno was to go to death with him.

-Do you think the sound of the album has caught up with the rhythm of work? What sound references do you handle?

-When we were building these songs, we had in mind to generate a domestic electronics. We wanted to make electronic music that would sound small and homey. We listen a lot to the Evening by Bjork (precisely that album was going to be called Domestika). We read in an interview how Bjork with his laptop sampled and processed elements that he had at home, and we found it super inspiring. Ultimately their album wasn’t called that, and our home electronics took on a life of its own and we let it go its own way. We also listen a lot to Billie Eillish, Sufjan Stevens and Thom Yorke.

-What is _juno’s genesis? How was the project created?

-After the Astronaut tour, the connection between us was such that we decided to start doing songwriting sessions for our albums. What we discovered was that what we were creating was neither for Mucho nor for Zahara. We understood that it had its own entity and that we had to respect it. We keep making songs knowing that we wanted to have a record and that once it was there we would share it with the world.

-How has the pandemic affected you in your life and in your career, the uncertainty of not knowing what will happen?

-The effect of the pandemic has been devastating throughout the musical and cultural sphere. Our respective tours had to be canceled. A few years ago, musicians gave up living on our records because they only left us the option to live off the stage, and now the pandemic has shown how neglected the sector is. Now you can no longer live neither from concerts nor from records. The only thing we could do was music, and that’s what we did: on the one hand there was Bitch [del que Martí Perarnau es productor] and, on the other, Is there someone at home [último disco de Mucho].

-_juno is not ‘Zahara’, it is not ‘Much’, and at the same time it is both. Your first album is titled _BCN626. What have you captured in it?

-We wanted to talk openly about privacy. Write stripping us of the ego and that it was truly 50%: all the songs are composed, recorded and produced to the beat. For us that was the fundamental essence of the project.

-It’s the title of the first song we wrote, and it gave us the feeling that all the others happened within those four walls, within that hotel room. We liked the idea of ​​geolocating them, as if they were airports, and also with the room number of that hotel; that only with the title you feel that intimacy that is in the songs.

-The first song you composed together, ‘Today the beast has dinner at home’, revealed a very political facet that continues with ‘Merichane’. Does art have more value when it is linked to the social and political reality of its time?

-Art is always political. Any gesture in our lives is political: life cannot be stripped of politics and therefore art cannot be stripped of content. Art is political, but it may or may not have political content. It is not better to have it, it is a personal decision. The act of saying nothing is also in itself a political act. We particularly believe that pop is a precious Trojan horse to introduce content or political reflections, precisely because it does not usually do so and you can be dancing while questioning aspects of life.

-In the images you are a boy and a girl in a bed, and in some of your songs you incite love but also desire, the carnal. Have we gotten over the ‘together forever’?

-I do not know. We only speak of love and desire from where we feel it at that moment. Thinking about whether that will always be the case or whether it will change is not of much use.

-How are you organized? The tour of one, the other, the project in common … Can you really create a new project and be free?

-It is possible thanks to the fact that the three projects we work with Pink House Management, who support and understand us, and they as managers are just as free as we as artists. Music is what leads us to be here and it is what we dedicate ourselves to practically all day. We can play one day, rehearse another, compose at another time … everything is still connected.

-Have you returned to compose for each one apart from _juno? Have you noticed the difference?

-It is very different to make songs together, because there we try to understand each other’s mind, and each one contributes something trying to make the song better, not to make their idea stand out more. In our solo projects, what each one wants to tell and express, and there it is not shared or discussed, it is only done (even when it is a Zahara album where Martí produces), in the end the one who decides there is Zahara. In Mucho’s case, it is a completely chaotic process that has nothing to do with _juno’s.

-Spirituality and fantasy seem to be very present on the album. What attracts you to these themes?

-We do not know that something attracts us until we see that it is expressed. In this album we did not seek to tell anything in particular, but rather that the songs were born from freedom, search and experimentation. It was only after the album was finished that we realized that the dream was so present.

-Why have you opted for secrecy and create a hype on social media, instead of explaining who you were from the beginning?

– We did not want to say that we had a group before having the album made. It seemed more interesting to us to have the project and then announce it. It was almost a year of secretly composing, recording and producing, so when it was time to go public we realized that we could do whatever we wanted, since nobody expected anything. Having that lack of pressure or expectation made us want to play mystery, and it was hilarious.

-How has _juno evolved since you started?

-This album was never played, but was produced while it was being created, so we had to invent a way to take it live. In concerts we have discovered that everything is alive, that our electronics are constantly evolving and learning. And we feel that the new songs that we are already creating will be the result of that.

-The song ‘_Aseguradora de Incendios’ is impressive. It contains a glorious phrase that is “forgetting is more difficult than living.”

-Thank you. It is a phrase that means so many things that we love to see how each person makes it their own.

-Take all this so meticulously recorded to live should not be easy, right?

-It’s not easy at all, but it is very funny. We live on a constant precipice where, although it may not seem like it, everything happens live. When everything goes well it is magical, but the house can collapse at any moment. We really like new challenges and we love taking risks in music.

– Unavoidable question. Where does the name of the project come from? What meaning did you want to give it?

-What are those attending _juno’s concert going to find?

-A total musical journey of approximately one hour and a quarter. We will play the entire album, but also, we have adapted two songs that we love from other artists. The instrumental parts are elastic, and in them we play with our machines until they cry with us.