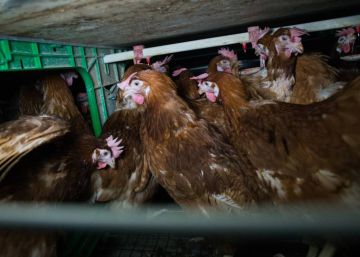 More than 38 million hens in Spain live crammed in cages, according to 2019 data Ministry of Agriculture, Fisheries and Food. Each bird lives in the space of a sheet of paper and without seeing sunlight. With cut peaks and permanent stress, develop their life as layers in which for 100 weeks they lay around 470 eggs. This system is known as enriched cage breeding and Spain, together with Poland, leads this modality (with 82% of the caged animals), while the European average is 52%. In fact, in Germany, Austria, the Netherlands and Sweden, caged birds barely exceed 10% of the total.

Since 2016, these four countries have opted for alternative systems such as breeding, where the animal develops in larger spaces, or the ecological one, where it lives freely abroad and feeds on organic feed. The consumer You can identify the differences through the numerical code: 0 indicates organic production, 1 the jacket, 2 on the ground and 3 in cage.

However, the shift towards animal welfare in Spain is also occurring, although slowly. Alternative parenting systems accounted for 7% in 2016 and 17.6% in 2018, according to the Spanish Association of Egg Producers (Aseprhu). That is, about five million chickens have stopped putting their eggs in cages.

María del Mar Fernández Poza, director of Aseprhu, blames these figures on the decision of the big distributors not to buy eggs from caged hens. According to Animal Equality, six of the seven supermarket chains with a national presence, with the exception of Dia, have made public this commitment to animal welfare. "This trend vto grow also by the pressure of animal organizations towards food distribution companies, who end up making decisions unilaterally", says Poza.

Among the oenegés to which Poza refers stands out Animal Equality Foundation. Since 2017, this entity initiated an awareness campaign at the doors of supermarkets to make visible the condition in which these animals are. Silvia Barquero, president of the foundation, regrets being "leaders in animal abuse" and that the figures differ so much from the European average. "Lthe egg industry resists this change because it is economically more profitable to keep the cages hen caged, "he adds.

Poza insists on remembering that the cage rearing system respects the European directive. "So we meet the animal welfare criteria," he says. As of 2012, producers were forced to expand the cage space to 750 square centimeters -equivalent to a folio- per chicken, to add nests and hangers for birds to climb. Deborah Temple, researcher of the animal behavior and welfare group of the Autonomous University of Barcelona, ​​indicates that the cage system "falls short" to improve the behavior of animals but insists on not demonize it. "Many field veterinarians will tell you that it is much easier to monitor the health of animals in the cage system. And that is also animal welfare."

Alberto Díez, director of the National Association for the Defense of Animals (Anda), doubts that these criteria are sufficient. "Even the eggs that are sold as cage free," he adds. "The client associates it with animal welfare but this is not guaranteed." Anda has created a particular seal that also ensures rural development and environmental sustainability. "Now a supposedly ecological product that competes with the real ecological one is sold. We are witnessing the industrialization of the alternative." Temple emphasizes remembering that the seal indicates the breeding system, not animal welfare.

From Aseprhu they claim that the "unilateral decision" of the big distributors directly affects the producers and limits the supply. "If you are restricting the marketing of one of them (the caged one), you are conditioning the consumer to buy what you put in the supermarket," he adds. Therefore, more and more farms are claiming to be adapting to these new demands. Ester Muñoz Gil, responsible for the External Relations area of ​​Huevos Guillén, one of the main Spanish farms, comments by email that he plans for a 100% cage-free production by 2025. "This year 2019 we will end 24% of our chickens in alternative systems," he concludes.

75% of Europeans consider it necessary to improve the welfare of farm animals, according to the Eurobarometer on animal protection. However, 90% of respondents would not be willing to pay more for farm animal products that live in better conditions. Market prices vary considerably. A caged chicken egg is around 15 cents, about 25 camperos and organic ones reach 50 cents. Eggs with the Anda certificate, approach the euro per unit. "Not everyone has the resources or the desire, sometimes, to bet on a high-level product," says Diez. "But the future is going to evolve towards a system in which, in addition to demanding animal welfare, we must apply the variable of environmental sustainability and that involve rural development. What is clear is that citizen awareness is already here" .