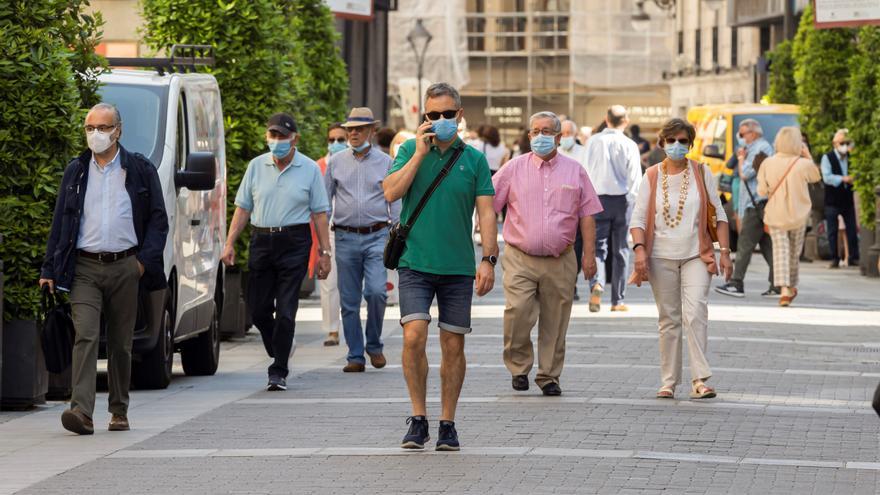 There are barometers that show surprising results, when not contradictory. 81% of Spaniards negatively value the country's economic situation and 85% believe that the employment data is bad, but 73% and 62%, respectively, respond that their finances and employment situation are good. They are data extracted from the last European Commission Eurobarometerwhich compares the perception of Spanish and European public opinion on issues related to the economy, the main concerns of society or the vision of the European Union.

The study, which was presented this Friday, was carried out between January 19 and February 14. It already asks about the tension in Ukraine, but the Russian invasion of the country came later, so it does not reflect the public's perception of the war or the social and economic consequences it has had on the entire continent.

Two years after the start of the coronavirus pandemic, the restrictions are already a shadow of their former self and the mask will no longer be mandatory outdoors in just under two weeks. Concern about health has fallen 10 points compared to 2021, but it seems that the population will continue to place it at the top of their fears for some time. This year, 42% have placed it between the two most important issues facing Spain at the beginning of 2022. It was ahead of unemployment (35%), rising prices (27%) and the economic situation (26%) .

49% of those surveyed in Spain affirm that the pandemic has had serious personal financial consequences for them and 95% that it has serious economic consequences for the country. 60% of those surveyed across Europe trust that, based on the response that the European Union has given to the coronavirus pandemic, it will make the right decisions in the future. In the case of Spaniards, this percentage is six points higher. However, around 85% consider that they should be given more resources so that they can manage the crisis better and just over half (54% of Europeans and 55% of Spaniards) believe that the recovery of 800,000 million euros will be effective to respond to the economic effects of the health crisis.

Inflation was a topic that did not usually appear among the majority of the responses of the Spaniards on other occasions. In this Eurobarometer it has risen 21 points compared to 2021, while in the case of Europeans it has increased by 25, up to 41%. It was, in fact, the most popular response in the whole of the European Union, the United Kingdom, Switzerland and the candidate countries for accession, which participate in this survey. When the survey was conducted, the price of electricity had been rising for months. However, this data could now be completely out of date, given the new panorama posed by the war in Ukraine.

This barometer pays special attention to the perception that citizens have of the European Union. All the questions related to a greater weight of joint decisions within the Union yield a positive answer. More positive even in Spain than outside. 76% of Spaniards consider that more decisions should be made at the European Union level, compared to 57% of Europeans. In addition, more than 80% believe that there should be a common foreign policy, in terms of defense, migration and energy, somewhat above our European neighbors. The trend changes regarding the reinforcement of external borders with more European border guards and coast guards. 64% of Spaniards are in favor and 25% against, compared to 71% and 22% of Europeans, respectively.

Another fact that contrasts with this interest in a common European policy is that only 45% of Spaniards and 47% of Europeans surveyed trust the European Union.

Fake news has been presented in recent times as a problem for democracy. This is considered by 82% of Spanish citizens and 81% of Europeans. It is a figure similar to that of Spaniards who say they find false news or information that they believe distorts reality -70% in the Union as a whole-. This is aggravated when 39% of Spaniards state that it is not easy for them to identify this type of false content.

In fact, citizens "tend to mistrust" the media. The worst part is television, which is trusted by 32% of those surveyed in Spain, compared to 49% in the rest of Europe. Only 37% and 49% of citizens, respectively, trust the written press. And on the radio, 45% and 56%. The majority of the population also mistrusts the content found on the internet (64%) and on social networks (72%).

Regarding the level of confidence of the citizens, the toilets continue to receive great support. They are trusted by 84% of Spaniards and 78% of Europeans, while Spaniards show less confidence than their neighbors as a whole in the rest of the institutions. In fact, none else approves in our country. Justice remains at 47%; the European Union at 45%; local and regional public authorities and public administration, at 44%; the Government, at 24%; Congress, at 19%; and political parties, at 10%.