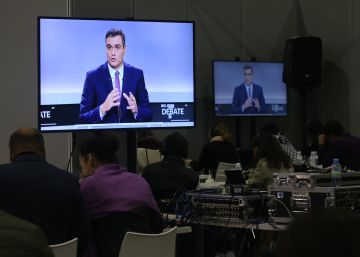 He Monday's debate, the third of the year, was also the least seen. The meeting organized by the Television Academy among the main candidates for 10-NPedro Sánchez (PSOE), Pablo Casado (PP), Albert Rivera (Citizens), Pablo Iglesias (Podemos) and Santiago Abascal (Vox) were seen by an average of 8,632,000 spectators, according to Windward data.

There is something below below 8.88 of the RTVE debate of last 22 of April 22 and even more of the 9.5 of Atresmedia the next day. The screen share was, of course, higher than in those meetings: 57.2% in the range between 22.00 and 0.51 (in the previous ones it had been 43.8% and 48.7% respectively, each in its strip). On all three occasions, just over 17 million viewers (37.9% of the Spanish population) saw at least one minute. The 60 seconds with more people in front of the television happened at 22.34 at night, in the block on national cohesion, while the candidates spoke of Catalonia.

With those numbers in hand, yesterday's was the least seen debate of democracy: one more step down the line that the audiences of these events have long drawn. The debates prior to this year handled figures such as 10.5 million viewers in 17 channels in the meeting of four between the then President of the Government, Mariano Rajoy, with Sánchez, Rivera and Iglesias in June 2016. In 2015, the face The face between Rajoy and Sánchez was the most watched space of the year, with 9,728,000 spectators. Which, alert those who are dedicated to observe these phenomena, is a sign of the times. “The television context of 2008, or even that of 2015, not to mention that of 1993 (all election years with its debates) has nothing to do with the current one. There has been a progressive drop in consumption in traditional television. The fragmentation of the audience, a consequence of the multiplication of channels, hinders the concentration of mass audiences ”, warns Professor Ana María González Neira, who investigates new audiences at the University of A Coruña.

In that sense, and knowing that this debate accompanies the second general elections of the year; that the same candidates have been arguing on television for four years now; and that this broadcast lasted almost three hours, which helps to dilute the average viewers, the decline is even slight. "Let's think that the basketball final of the Argentina-Spain world championship gathered 6.17 million spectators in Cuatro last September," Neira repeats. "Getting audiences of more than four million today is very difficult."

The data barely collect tracking on mobile devices: it is only known that Windward has 130,000 deferred views. "These figures would not turn around the data already offered, but it does allow it to be completed more accurately," reflects Neira.

It remained to be seen the effect that the presence of Santiago Abascal would have. The Vox leader was the only one without experience in this format on national television, and, in addition, his interview, at the beginning of October, in The anthill Antena 3 had resulted in a bombshell: 4,049,000, the most watched broadcast in the whole month. "It is impossible to calculate how many of the millions of viewers connected the television to watch Abascal," Neira said. "But the fact that it was not even more imply that people are more fed up with politics than with the political entertainment that these interviews entail."