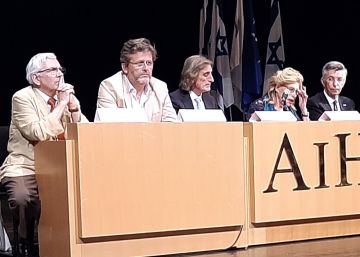 Far away are the echoes of the Ladino verses of The Spanish garden, the operetta on the daily life of the Sephardic Jews of the early twentieth century in Jerusalem whose libretto was written by the former president of Israel Isaac Navon (1921-2015). While in the Holy City and the diaspora the Judeo-Spanish language is extinguished, declared endangered by the Unesco, 600 Hispanics from 40 countries have met since yesterday in the largest conclave on Castilian that is remembered in the academic annals of Jerusalemites.

"We must support and recover the Sephardic culture", acknowledged the poet and professor Luis García Montero, director of the Cervantes Institute, who attended the inauguration of the twentieth Congress of the International Association of Hispanists at the Hebrew University. The language that Jews exiled from Sepharad carried as an identity for more than five centuries is still used, to a lesser extent, by between 100,000 and 300,000 speakers, according to unofficial estimates.

"There may not even be 100,000, three quarters in Israel and the rest in France, the United States or Turkey," he warns. Aldina Quintana, professor at the Hebrew University. "The ladino is dying, many of the Sephardic people who use it are over 90 years old and it is foreseeable that within a generation there will be hardly any speakers", argues this PhD in Hispanic Philology and the corresponding academic in Israel. Royal Spanish Academy (RAE). "The linguistic standardization by means of the Hebrew of the immigration of the diaspora towards the Jewish State is the main cause of its decadence", adds.

To try to counteract the Ladino's decline, the Cervantes Institute offers courses of Judeo-Spanish culture in Toledo together with the University of Castilla-La Mancha, and has also designed the so-called Memory Routes in cities where there was a marked Sephardic presence, such as Belgrade or Bucharest, precise García Montero.

The economic limitations of the Spanish organism of diffusion of language and culture, which has suffered budget cuts up to 40% in recent years, are behind the brake on its expansion, despite representing the second language with the largest number of native speakers, after Mandarin Chinese, and the second also by instrumental speakers, after English.

"If it improves our budget maybe we can consider opening in Ramallah an extension of the headquarters of Amman for the Palestinian territories," says the director of Cervantes, "like the one that was inaugurated in Baghdad." Today, Cervantes, which has the Tel Aviv center for Israel, it is offering training programs to Palestinian teachers of the Spanish language.

The shrinking community that speaks Judeo-Spanish in Israel, meanwhile, is still waiting for the announced creation of the National Ladino Academy. Diplomatic sources indicate that the Israeli Ministry of Culture has given its approval.

Ruth Fine, professor of Hispanic Philology and vice president of the International Association of Hispanics, acknowledged in statements to the Efe agency that the celebration of the congress in the Holy City is due to "special contact with the Ladino and the Sephardic world." "The Israeli hispanism starts from Sefarad, riveted. "The Jews took (when they were expelled) the most precious thing: the Judeo-Spanish language." Nearly 300,000 speakers of Latin American origin also keep the Spanish language alive today in Israel.

In addition to the ladino and the cultural traditions of their diaspora, literature is the other great axis of the appointment in Jerusalem of Hispanists from 60 universities. A dialogue with the public between Fernando Aramburu and David Grossman, two of the contemporary novelists in Spanish and Hebrew, respectively, with greater recognition, will put a snap on Thursday at the congress in Jerusalem. On the eve of the closure, four writers will also debate at the Hebrew University: the Sephardi Esther Bendahan (Spain) and Margalit Matitihau (Israel) with the Colombian Margarita García Robayo and the Spanish Marifé Santiago Bolaño.

CBS paid $ 5.8 million to interview the Duke and Duchess of Sussex, according to WSJ