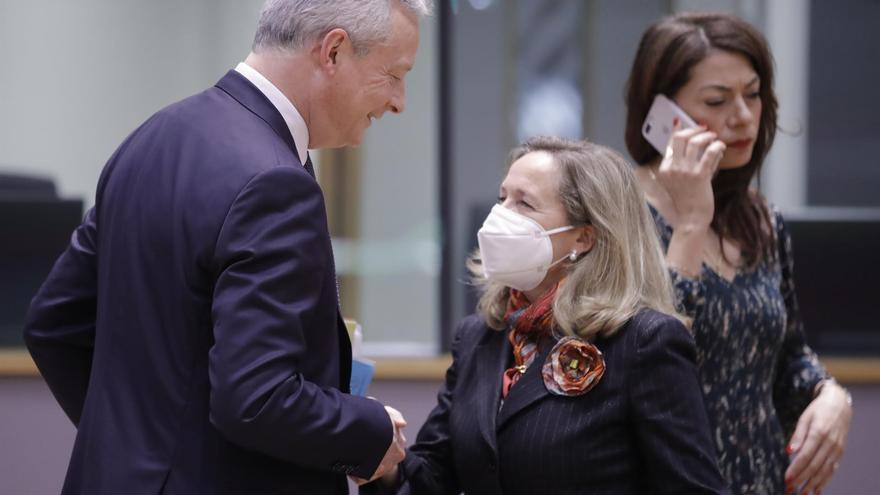 The pandemic first and the war in Ukraine have now accelerated the process of cohesion of the European Union (EU) as political and economic blocand new rules on the limits of state indebtedness and budget deficits become a key issue, after the temporary suspension of those in force as they become unusable to face the shock of COVID-19 and of the war and promote recovery. A survey of 5,000 citizens of Germany, France, Italy, Ireland and Denmark tries to put pressure on the economy ministers of the community club, who are meeting this Tuesday at Ecofin, by showing that 60% of these Europeans fear austerity and believe it is necessary greater fiscal flexibility to address reconstruction in the coming years.

The survey, commissioned by the New Economics Foundation (NEF), an analysis center that is presented with the aim of investigating and proposing a "new model of wealth creation, based on equality, diversity and economic stability", serves in support of the manifesto “for a green, fair and democratic European economy”, signed by dozens of civil organisations, committees of experts and trade unions supported by academics from all over the EU. In Spain, CCOO, USO or Attac appear, among others.

This manifesto defends that “the objective of economic policy in Europe should not be limited solely to reducing debt”. And he considers that "the Maastricht Treaty, signed in 1992, and the legislative changes subsequent to the financial crisis, originated strict fiscal restrictions limiting the public debt and the deficits of the member states".

Although coordination in terms of fiscal policies is necessary in a monetary union, “these rules, taking into account the new challenges facing Europe, are no longer fit for purpose: firstly they impose continuous limits on spending public, reducing employment and investment; second, they do not guarantee that we can adapt to and alleviate climate change through a just transition”, the manifesto states.

The European Commission considered extending for another year the clause that suspends the fiscal rules of the Stability Pact from practically the same moment that Russia began the invasion of Ukraine, on February 24, by the inevitable impact that the war has on the growth of the eurozone and especially on the most indebted states, such as Spain.

The NGO Finance Watch, which has carried out the survey for the NEF, published at the same time a report with concrete proposals on the EU's fiscal rules, among which the following stand out: “Move the arbitrary debt limit from 60 to 100% of debt to GDP [el de España cerró 2021 cerca del 120% y la última previsión de la Airef apunta a que se reducirá al 113% en 2023] or pass deficit rules [ahora el límite se encuentra en el 3%] to a single spending rule.

The president of the Independent Authority for Fiscal Responsibility (Airef), Cristina Herrero, considered a day before the war in Ukraine began "unthinkable" the recovery "right now" of the European rule of keeping public debt below 60 % of GDP.

Herrero pointed out that “everything points” to the fact that the European fiscal rules, suspended by the pandemic, will recover in 2023, although he sees it as “difficult” for the same thresholds to be restored. "What is important is the pace of adjustment" of the deficit and debt, he added, while advocating that the reform of the rules put the focus on sustainability and economic growth.

In the survey it is clear a confrontation regarding this issue between the partners of the North and the peripheral ones, the most indebted. Among the latter are some of the states hardest hit by the Great Financial Crisis of 2008, those that suffered the most from the years of austerity during and after the debt crisis.

In Germany, less than 50% of those asked about whether borrowing rules should remain flexible agree, while in Italy or Ireland the figure is closer to 65%. Meanwhile, in France it slightly exceeds 61%.

In the usual meeting, before the Ecofin, of the Eurogroup that brings together the Ministers of Economy that share the euro, the president of this body, Paschal Donohoe, assured that in all countries they are aware of the consequences of the war in companies, consumers and European "living standards", as well as the role they can play to "mitigate" this impact and help citizens to face its costs.

The joint statement from the Eurogroup on Monday urged the most indebted countries in the common currency, including Spain, to make "adjustments" to reduce it "if conditions allow", despite acknowledging that the war in Ukraine has increased uncertainty about the economic recovery.

The French Economy and Finance Minister, Bruno Le Maire, advocated agreeing on a "specific", "rapid" and "united" economic response to the impact of the conflict in Ukraine based on three pillars: budgetary policies capable of reacting to circumstances, aid due to the increase in the price of energy and specific measures for the companies hardest hit by the conflict.

On the contrary, in the opinion of the German Minister Christian Lindner, “it is not the moment” to have this debate yet because it is necessary to wait to see the consequences of the military aggression against Ukraine. "Let's see the economic events, let's hope they don't get worse, but it's not yet time to decide," he said on behalf of a country that traditionally defends a strict application of fiscal rules. Her counterpart and First Vice President of Spain, Nadia Calviño, emphasized that "she will always be among those who support a coordinated" and "European" response to "a challenge that obviously transcends national borders and therefore requires joint action."

"We must overcome the Maastricht Treaty"

“European economic governance was created for a completely different macroeconomic environment. In the 1990s, debt costs were an important part of the budgets of member states, representing between 3.5 and 11% of GDP”, he warns. Finance Watch in their report, in which they insist that “thirty years after the Maastricht rules came into force, European countries themselves have experienced a prolonged period of deflation risks (recently overshadowed by temporary spikes in supply-side inflation). ) and a continued fall in long-term interest rates to a historically low level”.

Indeed, Spain continues to enjoy unbeatable financing conditions thanks to the extraordinary performance of the European Central Bank (ECB) and the Next Generation EU recovery fund. For the first time, creditors ended up paying on average for the debt issued in 2021. And in 2022, until February, the cost of the bonds placed remained at 0.43%, below the average cost of all outstanding debt , which is at a historic low of 1.55% and will therefore continue to decline.

The interest burden – the bill that is paid each year for the debt – is close to an annual payment of 2% of GDP, compared to 3.5% in the euro crisis. "These levels allow a greater margin of maneuver for public spending," they insist on Finance Watch. For example, in order to address initiatives as the margin of tax reduction in electricity and fuels to face the rise in prices that the Government is studying.

The Ecofin meeting will address another critical issue to move towards a new tax system. “A political debate is expected on the proposal to transpose into EU legislation the global agreement reached at the OECD level on the establishment of a global minimum level of taxes for multinational groups”, observes Guillem Domingo, lawyer and professor of EAE.

"This global agreement was reached within the scope of the OECD in accordance with which the minimum tax level applicable to large multinational companies may not be less than 15% anywhere in the world," adds this expert.

The French Finance Minister, Bruno Le Maire, whose country is presiding over the EU council of ministers this semester, admitted that "there are one or two political obstacles to be overcome" but he hoped that a consensus could be achieved on the proposal that plans to apply a minimum tax of 15% on multinationals with a turnover of more than 750 million euros per year.

At a tumultuous time for economic news, it is more important than ever to be well informed. All the repercussions of the Ukraine war on the world economy, explained from a rigorous and different point of view.

Sign up for Contraoffer, every Thursday in your mailbox