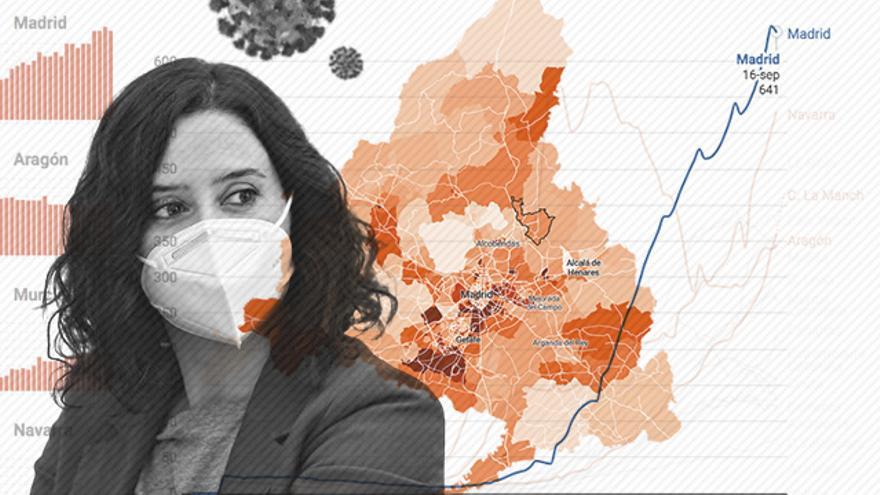 Since Spain entered the new normal after the general confinement, the Community of Madrid has become, week by week, the focus and main center of the outbreak of the COVID-19 pandemic. In two months it has gone from a cumulative incidence in 14 days of 9 cases per 100,000 inhabitants on July 15 to another of 642 on September 16. It is the first on that list followed by Navarra (with 527), La Rioja, Castilla-La Mancha and Aragón (which are at 374, 359 and 344).

Thus, in mid-September, Madrid is, once again, the epicenter of COVID-19. Not only the capital but the entire region where nine of the 10 Spanish cities with the highest cumulative incidence are located. In some districts of Madrid city, this incidence exceeds 1,000 infections per 100,000 inhabitants, which is more than four times the national average. This situation is felt in healthcare, which is increasingly demanded, both in health centers and in hospitals.

Cases and transmission have been growing while the regional government had great difficulties in complying with the disease control plan necessary to start the de-escalation of confinement and maintain the new normal: it was not able to hire the committed trackers. He asked for workers from the municipalities and pretended recruit volunteers among graduates of the Complutense University. He even hastily privatized a part of this group by admitting in the contract itself that it could not provide the service. Nor does it reinforce Primary Care, indicated as the cornerstone of the early detection system.

Municipalities with the worst data

Excluding Lorca (Region of Murcia), the cities of Madrid are the ones that have accumulated the worst epidemiological data at this point. The town of Parla leads the national ranking with an incidence of 992 cases per 100,000 inhabitants. After the Murcian town, which is the second, are Alcobendas, Fuenlabrada, Madrid, Collado Villalba, Torrejón de Ardoz, San Sebastián de los Reyes, Getafe, Alcorcón, Majadahonda and Colmenar Viejo. All are between 800 and 500 infections per 100,000 neighbors in the last 14 days. Well above the average in Spain. You have to go down to 13th place to find a location outside the Community of Madrid: Arrecife, in Las Palmas.

In the city of Madrid, the distribution of the pandemic reflects inequalities in abysmal areas. The affluent Chamberí district is the one with the lowest incidence: 291 cases / 100,000 inhabitants. At the other end are southern districts such as Puente de Vallecas (1,241 cases), Villaverde (1,156) and Usera (1,156).

In this sense, President Isabel Díaz Ayuso told this Tuesday during the debate on the state of the region that “most of the infections occur in the southern districts (…). Indeed, they are occurring, among other things, due to the way in which life that our immigration has in Madrid and because of the population density. It is a way of living in Madrid “.

Regarding population density, Villaverde is at 7,380 inhabitants per km2, Puente de Vallecas at 15,204 and Usera at 17,330, while Chamberí, much less extensive, has 29,364 inhabitants. However, this trio where the disease is multiplying much more does present the lowest income per capita in the city with just over 9,000 euros per neighbor. Half, roughly, from the district with the best data: Chamberí. In this sense, the foreign population in Usera, Puente de Vallecas and Villaverde exceeds 20% of the inhabitants while in Chamberí itself it is around 12%, according to municipal data.

With these figures, the pressure on the Madrid health system continues to rise. To the saturation in Primary Care, whose situation has led to the calling of a strike in health centers as of September 28, hospitals are joining. In fact, since August 20, the number of hospital admissions for COVID-19 has more than doubled. On that date, 1,245 admitted and 9.5% bed occupancy were recorded. On September 16 they were 3,207 and 22%. Some hospitals, especially in the south of the region, also they have already warned that intensive care units are filling up. The Ministry of Health ensures that 40% occupancy is not reached in the ICU, although it accounts for the extra spaces enabled during the peak of the first wave of the pandemic.

Hospital pressure in each CCAA

Evolution of daily hospital occupancy in each autonomous community

The question is the Community of Madrid is the region of the European Union where COVID-19 is most accelerated, according to reports from the European Center for Disease Control. And the capital also stands out among the large cities of Europe. Díaz Ayuso tried to excuse himself a few weeks ago stating that the situation resembles that of “any European city”. However, the data does not support that statement. Paris, Brussels, Amsterdam, Berlin, Athens or London present a better situation.

While the disease spread throughout the Community creating the situation reflected by all these variables and indicators, Isabel Díaz Ayuso’s team has repeated throughout this journey of pandemic escalation that much of the danger came from the Barajas airport (competence of the central Executive) . If Ayuso affirmed on July 25 that “we continue with a special surveillance system. The virus is almost non-existent unless it re-enters through some routes, especially air. The airport has to be with us. The Government is being very short and we will regret it in a few months “, its vice president Ignacio Aguado called the infrastructure” strainer “on August 26. On May 15, Ayuso affirmed that Madrid was “ready” and had “fulfilled” to begin the de-escalation despite the refusal of the Ministry of Health. Her vice president also pressed by saying that the government was attacking the Community and that its health system was “prepared to face an outbreak.” This Thursday, September 17, Aguado himself declared that “it is impossible to end an epidemic of these characteristics from a regional government“.