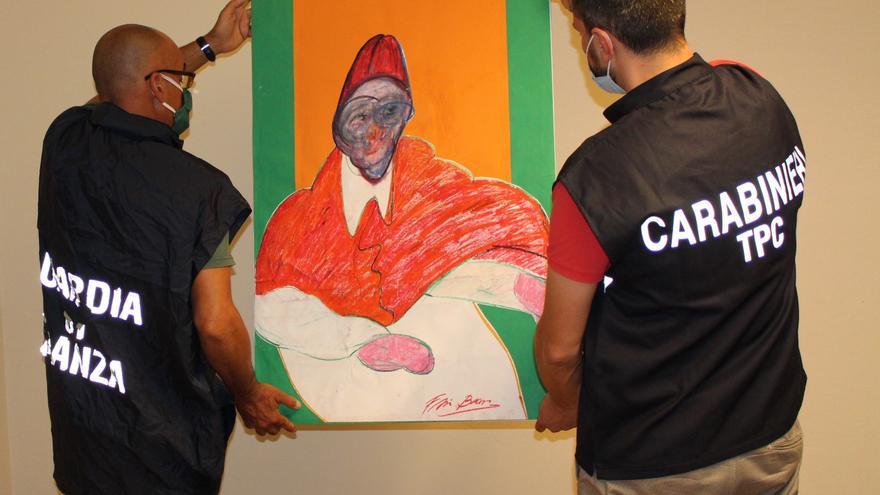 Rome, Sep 10 (EFE) .- The Italian authorities have confiscated some 500 counterfeits of works by British artist Francis Bacon, after dismantling the activities of a group that circulated fake pieces of art thanks to a complex fraudulent system with international ramifications.

More than 60 agents executed the court orders to preventively seize the works in the provinces of Bologna, Padua, Milan and Treviso (north), as well as money and goods worth three million euros, held by 5 of the 7 people investigated for a crime of association to commit a crime against the integrity of works of art and heritage, the Carabineros revealed today in a statement.

The investigation had already allowed the carabinieri to seize several works of art in 2018, including two drawings signed by Bacon allegedly delivered directly by the artist to one of those investigated, whose suspicious financial movements led to international judicial cooperation to trace the destination of funds derived from various scams.

This led to the confiscation of another 13 alleged works by the famous British artist in Bologna and Treviso, between the months of March and May 2020.

“From a meticulous reconstruction of the cash flows derived from fraudulent sales, it was seen how the association (…) used a company domiciled in the United Kingdom to channel and reuse the amounts obtained and then, once ‘clean’, redistribute them among the suspects, directly or through national and foreign companies domiciled in Spain and Poland “, it is explained in the note.

At the same time, “complex technical checks (…) made it possible to determine the lack of authenticity” of the more than 500 pieces of Bacon that are part of the Italian collection of the criminal group.

The objective of the band was “to accredit said drawings in the art market through prestigious national and international exhibitions, catalogs, Internet sites, foundations and foreign law societies, in order to increase their ‘price’ and then resell them, for therefore fraudulently and at a high price, to unsuspecting buyers. ”

Francis Bacon, who died in 1992, was one of the most famous artists of the 20th century and his paintings are among the most sought after in the world.