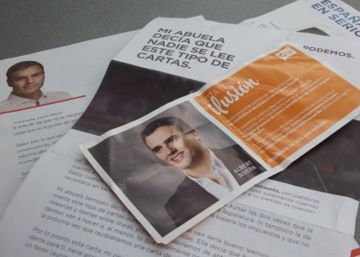 Next Sunday, April 18, the electoral campaign for the elections in the Community of Madrid officially begins. This date also marks the starting gun for the sending of publicity from political parties to try to convince citizens to give them their vote. Letters that, in addition to being a huge waste of paper, can be annoying for some people. However, not all of them know the different formulas to avoid receiving this type of propaganda in their mailboxes or emails.

Voters can, first of all, go to the National Statistics Institute (INE) to request their removal from the census and limit all types of sending. Furthermore, there is the possibility to exclude the spam election of those political parties that are not of interest to you.

Of course, as Alejandro Álvarez Serrano, a specialist in data protection and privacy at the Mas y Calvet Law Firm, points out, “it is important to take into account the deadlines to carry out the management with the INE”. In fact, in accordance with the applicable regulations, once the Madrid elections are called, there is a period of thirteen days to request exclusion from the census for postal shipments. Since the announcement of the elections was published in the Official Gazette of the Community on March 11, this interval has ended. Therefore, those voters who have not exercised their right will continue to be on the lists that are sent to political parties to start sending their campaign advertising.

However, there is still time for those who wish to get rid of the propaganda of political parties that are not of interest to them. Now, says Álvarez, this management “can be somewhat cumbersome.”

It is about requesting the discarded formations to exercise their rights of access, opposition and deletion, in accordance with the provisions of articles 15, 21 and 17, respectively, of the General Data Protection Regulation (RGPD).

First, the application must include the name and surname of the voter, as well as a copy of their ID or passport. In the letter (postal or electronic mail) you must express the desire to exercise the rights of access, opposition and deletion, in accordance with the provisions of articles 15, 21 and 17, respectively, of the RGPD.

It must be specified that opposition to the processing of your data is requested, by virtue of articles 16.2 and 18.4 of the Spanish Constitution, as well as article 21 of the RGPD.

On the other hand, in the event that the voter’s information is stored in a database of ideological profiles, Álvarez explains, he can expressly request its elimination.

If despite having requested it, the voter continues to receive spam electoral system, “you may file a complaint with the Spanish Data Protection Agency (AEPD) or request advice from a trusted lawyer to carry out this management on your behalf,” says the expert. The political party, he adds, “has the obligation to respond to that request and to use this data only for the purpose indicated by the imperative of the RGPD and the Organic Law on Protection of Personal Data and guarantee of digital rights.”

The exercise of the right to object does not expire. In other words, citizens can express their opposition to a party using their data at any time. For example, “to send us political information, electoral propaganda, etc.”, Álvarez points out.

On the other hand, he adds, it must be taken into account that the data is provided to political parties by legal provision and not by consent of the affected party. As the lawyer explains, its use is endorsed “on the basis of the controversial third final provision that introduced the current article 58 bis of the Organic Law of the General Electoral Regime.” For this reason, unless the voter expressly requests before the INE to be excluded from the mailing list, the formations may continue to use this data in the next elections. In other words, as Álvarez warns, “it will be necessary to go back to the party or parties in question each time to exercise the right of opposition again.”

Ideological profiling is prohibited. The aforementioned article 58 bis, which allowed these practices, was appealed to the Constitutional Court, which vetoed the lists in a ruling of March 22, 2019.

The High Court appreciated, in the first place, that beyond the generic mention of the “public interest” of the precept, “the appealed legal provision did not determine by itself the purpose of the processing of personal data that revealed political opinions,” explains Álvarez. On the other hand, the norm did not limit the treatment of this information, “nor was it regulated in detail the restrictions on privacy.” Finally, according to the court’s opinion, insufficient guarantees were offered to protect the fundamental rights of citizens.

As the lawyer explains, if the political formation uses the data provided for another purpose, it would be committing two acts punishable by the Spanish Agency for Data Protection (AEPD). On the one hand, not meeting a right that you have the obligation to meet; and, on the other hand, it would be using the personal data of a citizen without their consent.

The lack of attention to the right to object is considered a very serious offense, sanctioned by the RGPD with fines that can reach 20 million euros. If it is a company, this penalty could be equivalent to 4% of the total global annual business volume of the previous financial year. In the latter case, Álvarez points out, “the highest fine would be chosen.”

In March 2019, the AEPD published a circular in which it restricted the collection and processing of data to draw ideological profiles, as well as the sending of electoral propaganda by electronic means or spam electoral. Likewise, it limited the use of big data and artificial intelligence, prohibiting practices such as microtargeting and the use of systems that could divert the will of the voters. Additionally, it limited access to information obtained on web pages or social networks, such as Facebook or Twitter, and obliges that, once the elections are concluded, said information be destroyed.

“After the noise, comes the fury”