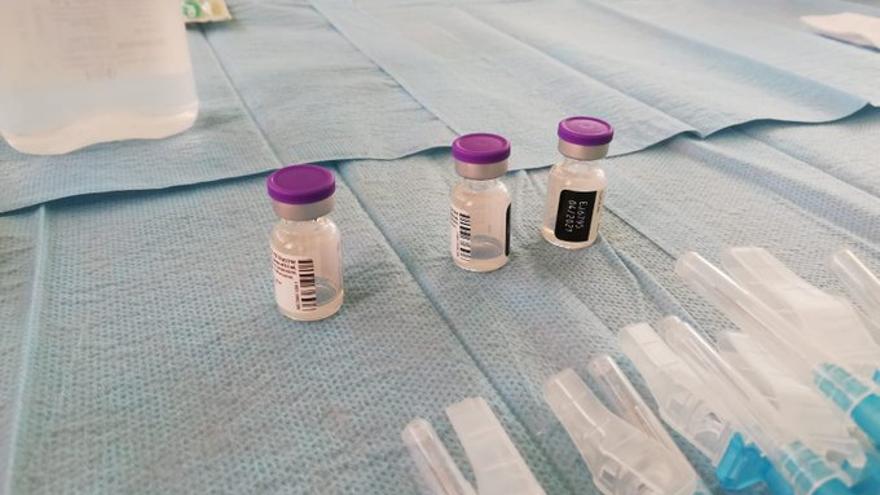 In total, 803,045 doses of vaccines against COVID-19 have been administered in the Archipelago, of the 907,380 received, which represents 88.50 percent of arrivals to the Canary Islands.

Regarding group 6, since the vaccination of groups of teachers, police and firefighters was resumed, 10,467 people have already been vaccinated, going from 18,500 to 28,967 who until yesterday had received the vaccine. The citation and vaccination of these groups continues during these days.

Until yesterday, the immunization of 266,161 people had already received the complete vaccination schedule in the Canary Islands, which represents 14.23 percent of the target population (1,871,033 people).

On the other hand, in the Archipelago there are already 547,906 people who have received at least one dose of the vaccine, that is, 29.28 percent of the target population.

The Ministry of Health also informs that it has already begun to vaccinate the group formed by the under 60 years that, for the moment, they are being summoned by their respective health centers in those basic health areas and islands in which the vaccination agenda of the group over 60 years old was already covered.

Group 3 is already one hundred percent with one dose and 30.23 percent with two doses; and group 6, 43.89% with one dose. Of group 7, which includes the population under 60 years of age at risk of severe COVID-19, there are 10,868 people since they have been vaccinated with one dose, 61.28 percent of the target population.

As of yesterday, 266,161 people have been immunized who have already received the complete vaccination schedule in the Canary Islands, which represents 14.23% of the target population

In the latest revision of the National Vaccination Strategy the following are established vaccination groups and prioritization:

43% of teachers, police and firefighters in the Canary Islands have received at least one dose against covid-19. Read more

The Police evict a hotel room in the Canary Islands where a party was being held without complying with the COVID-19 regulations. Read more

First bottle in Las Canteras after curfew waned. Neighbors of Las Palmas de Gran Canaria They denounced a massive bottle that took place at night -about 11.00 p.m.- this Thursday, May 13, in the middle of Las Canteras beach.

The fear of the bottles deploys 7,000 police officers in the Islands. Read more

By islands, Tenerife today adds 102 cases, Gran Canaria 28 cases, Lanzarote 29, El Hierro 2, La Palma one and La Gomera none. As for Fuerteventura, the Ministry has subtracted 22 cases this Thursday. “It is due to the suppression of the Grafcan statistics of the positives registered among the migrant population, since these infections do not represent a risk for community transmission, as they are controlled and following the corresponding isolation protocol,” he explained in a statement.

The another death in Tenerife corresponds to a 72-year-old man, which was infected in a social / family outbreak, and those of Gran canaria They are from a 69-year-old woman and two 75- and 77-year-old men, the latter associated with a work / family outbreak.

A 31-year-old man dies from Covid in the Canary Islands diagnosed postmortem. The Ministry of Health of the Government of the Canary Islands has notified this Thursday 140 new cases of coronavirus, in addition to five deaths, three in Gran Canaria and two in Tenerife. One of the deceased was only 31 years old and the positive was confirmed by postmortem PCR, as indicated by the Ministry, which states that it is “a judicialized case.”

The Ministry of Health of the Government of the Canary Islands notifies today 140 new cases of coronavirus Covid-19. In addition, in the last hours there has been the death of 5 people, three of them in Gran Canaria and two in Tenerife. Tenerife has 102 cases, 29 Lanzarote, 28 Gran Canaria, 2 El Hierro and 1 La Palma.

The President of the Canary Islands, Angel Victor Torres, has recognized this Thursday that “I would not tell the truth if I did not say that, logically, there is some concern” about the outputs that may occur during the next weekend after the end of the curfew.

But, the President of the Canary Islands stressed, it must be recognized that the canarian society He had an “exemplary” attitude last weekend and there were no images, as in other places in Spain, of people celebrating “no one knows what.”

The Bishop of the Diocese of the Canary Islands –which represents the islands of Gran Canaria, Lanzarote and Fuerteventura, Jose Mazuelos, has decreed this Thursday the suspension of all manifestations of faith in the public thoroughfare –processions and pilgrimages–.

In this way, the Eucharist can only be held outside the churches to guarantee a greater participation of the faithful, always in accordance with current legislation and previously communicated to the authorities.

As reported by the Diocese, worship within the temples will be maintained as in the last months respecting the measures determined by those responsible for public health to ensure adequate sanitary protection.

“These measures will be in force until the health authorities guarantee that we are at a low level of contagion because we have reached the immunity of the majority of the population,” concluded Mazuelos.

The Ministry of Health of the Government of the Canary Islands reminds that foreign persons legally residing in the Archipelago who do not have a health card can be summoned to receive the vaccine against him Covid-19. To do this, pThey can go in person to their nearest health center to update their contact information, providing a registration certificate that certifies that they are residents of the Islands, as well as their identification document and their passport. Once your data is registered in the Canary Islands Health Service (SCS) system, they will be scheduled and vaccinated at the established inoculation points, always prioritizing by age group.

With respect to group 6, which includes teachers, firefighters and police, among other groups, four out of every 10 people have already received at least the first dose. In this group, it has gone from 20,255 people, that is, 30.60 percent, who had been vaccinated until last Friday at 27,037 who as of yesterday, Wednesday, have received the vaccine, that is, 40.97 percent. percent of this group. Which means that in the last five days a total of 6,782 people in this group have been vaccinated.

Until yesterday, the immunization of 257,792 people had already been received in the Canary Islands, the complete vaccination schedule, which represents 13.78 percent of the target population (1,871,033 people).

On the other hand, in the Archipelago there are already 521,707 people who have received at least one dose of the vaccine, that is, 27.88 percent of the target population.

The Ministry of Health also informs that the group formed by those under 60 years of age who, for the moment, are being summoned by their respective health centers in those basic health areas and islands in which the vaccination schedule of the group over 60 years was already covered.