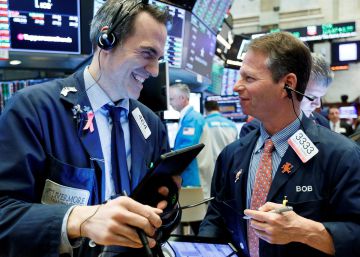 Institutional investors, that is, managers of investment funds and pension plans, banks and insurance companies, dominate the shareholder landscape of listed companies in the world. 41% of the ownership of the market capitalization is in their hands, compared to other types of owners who control a much smaller part of the pie: the public sector, for example, has 14%; private companies and individual shareholders account for 18%. An OECD report has analyzed what hands rock the cradle of business property and the differences that exist between countries and regions.

The work intends to lay the foundations for a more detailed analysis in the future about how property type affects the competitiveness of companies and the development of economies. The authors have analyzed 10,000 large listed companies, which total 90% of the global market capitalization. With data from the end of 2017, there were 41,000 open capital companies in the world worth about 84 billion dollars (75.5 billion euros), the equivalent of world GDP. "Hence, knowing who their owners are and how they play their role as shareholders is of great importance to the economy," the authors point out.

It is important to know who controls the ownership of companies, explains one of the authors of the report, Serdar Çelik, because different types of owners have "different incentives and strategies when using their voting powers in companies" . Çelik, a senior economist at the OECD, gives some examples: "When institutional investors use index-based passive investment as an investment strategy, they may not have the incentive of being attentive to individual companies and providing capital to new ones so they grow." . In the case of the public sector, dominated by governments according to the study, "their behavior may be directly or indirectly influenced by political priorities," says Çelik.

Asia leads in number of listed companies, according to the report, which details that 57% of all companies in the world are listed on an Asian market and that, in total, these account for 37% of the global stock market value. On the other hand, only 10% of those listed are in the United States. Despite this, this country is the largest world market by value, since it accounts for 36%. In addition, the United States has the largest companies by market capitalization: it has more than half of the 100 largest companies.

Central and local governments account for 56% of ownership in public hands, followed by sovereign wealth funds, public pension funds and public companies. In China, this type of ownership is the majority: it accounts for 57% of total public investments in global markets. In more than 8% of listed companies, public ownership exceeds 50% of the share capital. In addition to China, it is important in countries such as Saudi Arabia, Malaysia and Norway, where the public sector accounts for between 34% and 46% of the market capitalization.

Private companies and holding companies are prominent owners in several countries, such as Chile, the Philippines and Turkey, where they account for 55%, 48% and 40% respectively of the share capital of listed companies.

Çelik points to another possible problem that the report can help analyze more in depth: "When there is a high level of concentration of ownership in a company, the risk of abuse of minority investors increases." In more than half of the listed companies, the three largest investors accumulate more than 50% of the capital. In most markets, the report emphasizes, it is private companies or individuals who appear as the largest shareholders in individual companies.

Cross-border investments are increasing, Çelik notes. The report shows how these operations account for almost a quarter of the investment in equity markets. Almost 75% of these purchases are made by investors domiciled in the United States or in Europe. At the same time, these two markets receive 60% of global investments. With the increase in these operations, Çelik points out, "the political leaders of the states that, for example, pay pensions with that money, will ensure that their expectations regarding corporate governance are met."

The study highlights that in listed companies in the Netherlands, the United Kingdom, Brazil and Argentina, more than 40% of the capital is held by foreign investors. On the other hand, in the two largest markets, the United States and China, foreign ownership in their companies is relatively low compared to national shares.

To questions about how states can use the data in their report to make certain decisions, Çelik recalls that funds are becoming an increasingly important source of capital. "The study provides comparative information on the size of the property they manage in each market, so that leaders can ensure that they take the appropriate steps to develop their markets in ways that attract this new and growing source of capital," he concludes. .

MásMóvil’s board of directors issues a favorable report on the takeover of KKR, Providence and Cinven

The rich continue to order cars from Ferrari | Fortune