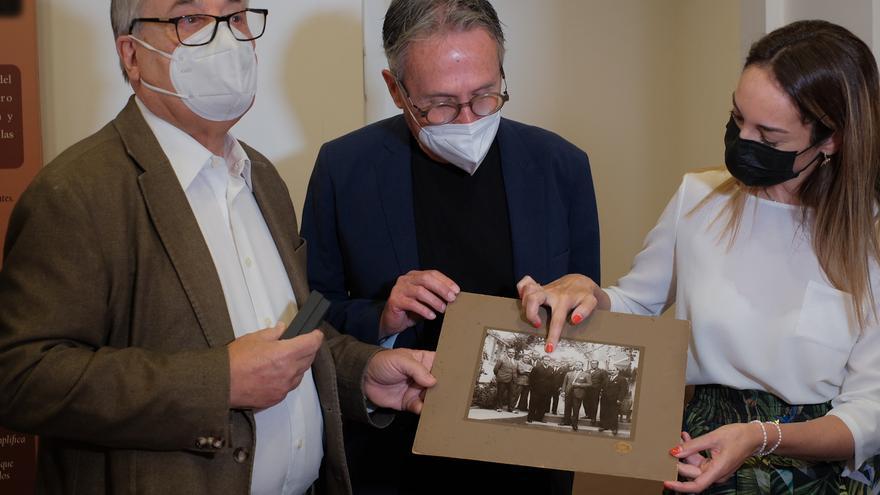 The Minister of Culture of the Cabildo de Gran Canaria, Guacimara Medina, delivered today to the president of the Juan Negrín Foundation, José Medina, more than 4,000 digitized and cataloged pieces that make up 2,000 documents from the documentary collection of the former mayor of Las Palmas de Gran Canaria during the republican period, Nicolás Díaz Saavedra, whose laborious scanning process has been carried out in recent months at the Tomás Morales de Moya House-Museum.

The lawyer Nicolás Díaz Saavedra Navarro (Las Palmas de Gran Canaria, 1901-1974), member of the Federal Republican Party of José Franchy Roca, as well as mayor of the capital between 1931 and 1932, he was interim governor of his province in 1936. The collaboration between the Juan Negrín Foundation and the Council of Culture of the Gran Canaria Cabildo, in accordance with the instructions of José Díaz Saavedra, allows documents to be available in digital format, facilitating inquiries by scholars and researchers.

The Minister of Culture, Guacimara Medina, highlighted in the act of delivery of the aforementioned materials, that Nicolás Díaz Saavedra “is an important and interesting character in the recent history of Gran Canaria politics, in a troubled moment such as the Second Republic. This delivery seals the intention of continuing to collaborate institutionally with the Foundation, to make known and value part of the history of the Island from the political and social point of view, also facilitating its consultation through the network to researchers. from all over the world, ”he explained.

For his part, José Medina, president of the Juan Negrín Foundation, assured that "the digitization and cataloging of these documents was fundamental for our historical memory and their definitive preservation for future generations," said Medina, who regretted that the current generations have a great ignorance of the republican stage and the civil conflict and what it meant in the life of Las Palmas de Gran Canaria, the island and the Canary Islands in general, and also Spain.

In addition, José Antonio Sosa Díaz Saavedra, grandson of the former mayor, demonstrated the satisfaction and joy that for the Díaz Saavedra family it was assumed that the Foundation has all the documentation scanned and available to the researchers, “because that was the reason for the donation, which It is completed with a larger one of a historical and familiar nature belonging to his grandfather, also deposited in El Museo Canario. "The figure of my grandfather is that of a straight man, always impeccable in his behavior and in his way of being, as well as a person committed to society, who had to live a difficult time," he recalled.

On the other hand, Guillermo Perdomo, director of the Tomás Morales de Moya House Museum, explained that digitizing this collection supposes “recovering a piece of our history, quite dark and of which we still have no certainty about what really happened. With these digitized documents something is clarified and deepened in the figure of Nicolás Díaz Saavedra ”. This work has also allowed Perdomo to find information about his executed grandfather in the archive, in an exercise, without intending it, to "recover a part of his family's past and reestablish his memory."

The aforementioned museum center dependent on the Ministry of Culture of the Cabildo Gran Canaria has digitized and cataloged materials contained in a total of nine folders and two bags containing photos, letters and newspaper clippings of the time, as well as documents, mostly from the stage in the capital city hall. Likewise, among the digitized documents there are some that link Saavedra with Freemasonry under the name Masonic Omega, as well as others from his time as a prisoner in Gando. Letters crossed between the Republican lawyer and different national and local politicians, such as Juan Negrín, José Franchy y Roca, Rafael Guerra del Río and Luis Fajardo Ferrer, among others, were also digitized.

The digitization process that has been completed during the months of February, April and May of this year 2021, has had to be made compatible with other tasks of digitizing the archives of the Moya museum, such as the Canarian poetic library. It was made by the documentary filmmaker Raquel Ortiz, together with Lucía Morera, who during that stage were in the museum center as scholarship holders through the Las Palmas University Foundation. Coinciding with the digitization of said collection, the Díaz Saavedra family has donated three drawings by José Hurtado de Mendoza to the Tomás Morales de Moya House-Museum. It should be remembered that this museum center has a room dedicated to José Hurtado de Mendoza in memory of this cartoonist who was the great-nephew of Benito Pérez Galdós and who made part of the cover of the book 'Las rosas de Hércules', by Tomás Morales.

The documents that have been digitized in the Moya museum center thanks to a collaboration agreement were transferred to the Juan Negrín Foundation by his son José Díaz Saavedra de Morales - now deceased -, in two deliveries.

The first delivery, verified on January 13, 2015, consists of personal letters, press clippings, postcards, drawings, ballot papers and receipts; While the second was held on December 7, 2016 and includes municipal minutes, documents on processes, policy from 1931 to 1936, photographs and documents on prisoners, as recorded in the deposit certificate.

However, José Díaz Saavedra's collaboration with the Juan Negrín Foundation dates back at least a decade earlier, on the occasion of the first exhibition on the figure of Juan Negrín López that was held in Spain. In 2005 José Díaz Saavedra gave various documents from his father's archive to be part of the sample Juan Negrín, the statesman. The quiet energy of a statesman, which was inaugurated at the Canarian Museum of Las Palmas de Gran Canaria by Minister Carmen Calvo, then head of Culture and today Prime Vice President and Minister of the Presidency, Relations with the Courts and Democratic Memory.

Among the documentation provided for that sample, there is a letter from the then deputy Juan Negrín, who on February 12, 1932 informs Díaz Saavedra about the steps he has taken with various ministries at the request of the mayor. The mayor of the capital wants to collect a 'filming tax' for the transit through the port road and also claims the fate of 25 guards to the Civil Government of Las Palmas.