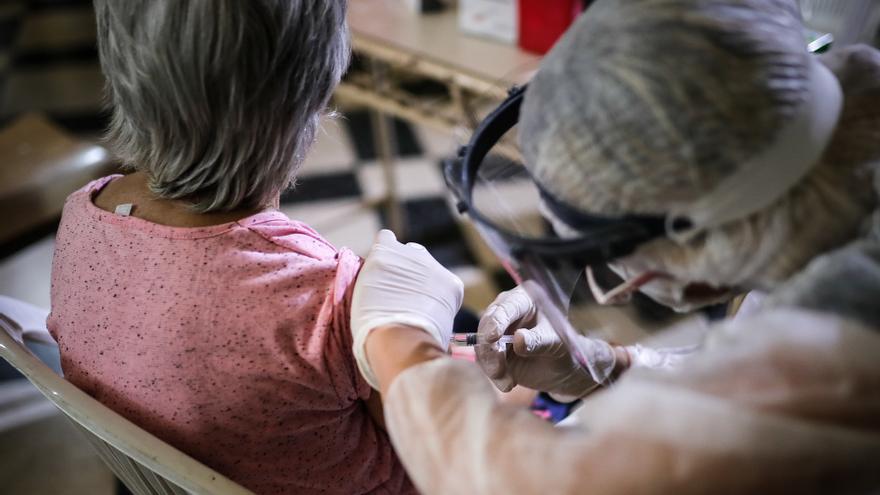 The Center for Sociological Research (CIS) asked respondents for the first time this September if they would get a vaccine against COVID-19 "immediately", "as soon as it is available." 44.4% answered yes, without conditions; 40.3% who did not, in no case would put it on as soon as it is available in Spain. There is 11.2% who do not know and doubt. And a smaller percentage of people who would wear it, but with conditions: "if it has guarantees, if it is proven and if it is reliable", 2.1%; "According to origin", 0.4%; "If there is enough information", 0.2%; “On the advice of the authorities, scientists or health workers”, 0.4%.

The CIS asks about the vaccine now that the Government sees it closer than a few months ago, when it was expected at the earliest for mid-2021. Although the one developed by the University of Oxford suffered a stoppage last week for a few days, Minister Salvador Illa and President Pedro Sánchez continue to trust that they will have the first million doses by the end of December 2020. Spain is within a pre-agreement of the European Union with five other laboratories. The question of whether or not to get the vaccine does not develop options for "no", it simply encompasses those who would not get it "immediately" after it is available.

Specifically about the vaccine, the Spanish have never been asked until now from the Research Center. The closest thing had been when in the March barometer, in which they were still asked whether “they had heard or not about the coronavirus”, they were asked to answer whether they agreed or not with the statement “the investigation with the purpose getting a vaccine is the only solution against the coronavirus COVID-19 ". 62% said yes on that occasion.

The question is part of the package of questions that the agency incorporated into its questionnaire after the pandemic began. Citizens are also asked what worries them more about the situation our country is going through, the effects on health or the effects on the economy and employment. A third, 36.6%, are more concerned about health; 24.1% for the economy, and 38.5% for “both equally”.

To only 6.2% of those surveyed, the performance of the Government of Spain so far deserves "a lot" of confidence; 25.4% "quite a lot", 29% "little" and 27.8% "no confidence." 15.8% believe that the Government of Spain should take over the management, 4.9% the communities, and the majority, 72.3%, "both in collaboration". There is a lot of polarization on the general behavior of the population: 48.3% believe that "the majority are reacting with civility and solidarity", and 43.1%, "that the majority are being uncivil and undisciplined".

Regarding the measures to face the pandemic, 58.3% believe that "more demanding measures should be taken" than those that have been taken so far. 25.8%, that "we can continue until now." Only 1.1% believe that the measures should depend on each area and that same number considers that more means are necessary, such as tests or trackers. Spain, according to the European Infectious Disease Prevention Center (ECDC), is the country with the highest incidence of COVID-19 cases on the continent, by far. In the last 14 days, 287 cases have been detected for every 100,000 inhabitants; the next with the most is France, where there have been 166 cases per 100,000 inhabitants.

The vast majority of Spaniards, according to the CIS, believe, after what they experienced during the pandemic, that Spanish healthcare needs reforms - 10%, which is fine as it is. In July, 88% believed something else. 79.2% of all citizens think that it is urgent to dedicate more economic resources; 79.3% increase the number of health workers; 75.4% increase the coordination between the central government and the communities in this matter and 73.3% increase the facilities and resources dedicated to addressing pandemics. The Ministry of Health has already confirmed almost 30,000 deaths since February from coronavirus, although the excesses of deaths during the health crisis for this and other reasons are close to 50,000 according to the Carlos III Health Institute.

The survey also asks about going back to school, since it was prepared coinciding with the days on which classrooms were reopened after 6 months of online education first and then vacations. In-person education is preferred by 36.1%, the largest group closely followed by the combined online and face-to-face method (36.8%), and only 9.6% who see only online classes as preferable.

The vast majority of respondents (87%) have not had to seek medical services for issues related to the coronavirus. Of the 12.2% that did, the vast majority turned to their doctor or primary care services and 70% were satisfied with the care received. 70% had to keep isolation and the majority had a PCR test (61.7%), although only 27.5% were positive. Of these, only 14% were admitted to the hospital.