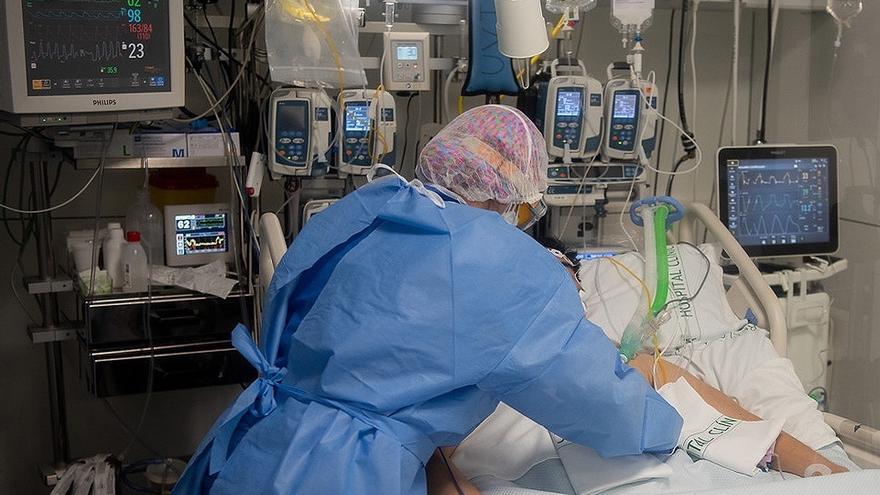 Half of those hospitalized in the UK with COVID-19 have developed one or more health complications during their hospitalization, including the very young. That is the conclusion of a study published in the journal The Lancet which has analyzed the evolution of 70,000 adults from 302 hospitals in the country. The research sheds light on the behavior of the disease during hospital admission and “contradicts current narratives that COVID-19 is only dangerous in older people or those with pre-existing comorbidities,” says Professor Calum Semple, lead author of the paper.

These health difficulties of people admitted with the disease occur “even in previously healthy young individuals.” Although the problems presented increased with age and men over 60 years of age were the most affected, 27% of people between 19 and 29 years old had complications, a percentage that increased to 37% for the age groups of 30 to 39 years. The young people also had “acute” problems, that is, they were not allowed to take care of themselves after leaving the hospital. Among people aged 19 to 29, 13% had these complexities, and 17% of those aged 30 to 39.

According to the authors of the article, it may be that these difficulties, different from those observed in persistent COVID-19 patients who were not hospitalized, have a short-term and long-term impact. Not only in those affected, but also in “medical care, the preparation of the health system, and the general society in the midst of the pandemic.” Therefore, Semple and his colleagues caution that the results of their work must be taken into account when making political decisions.

The analysis was carried out between January 17 and August 4, 2020, before the “wide availability of vaccines” and when there were not yet “emerged new variants of the virus”. However, the research group believes that their findings “remain relevant in dispelling suggestions that COVID-19 poses no risk to healthy young adults, many of whom remain unvaccinated.”

For his part, Dr. Thomas Drake, from the University of Edinburgh and co-author of the study, comments that they have found that “short-term damage to various organs is extremely common in people treated in hospital” for coronavirus infection. “People who have complications will often need expert care and extra help to recover from their admission,” adds the scientist. For Drake, these data can help to “plan” political actions and decision-making, since they concern “economically active” age groups.

The problems studied were varied, but the most frequent were related to the kidney, heart and lungs. Almost one in four people had kidney difficulties; one in five were affected by respiratory problems; and one in six were affected by systemic problems, which are those failures or disorders that affect the entire body.

Cardiovascular complications were also reported in 12% of patients, neurological in 4%, and less frequent gastrointestinal or hepatic complications, less than 1%, corresponding to almost 8,000 people. Specifically, some of the most observed health disorders in patients were acute kidney injury, acute respiratory distress syndrome, liver injury, anemia, and cardiac arrhythmia.

After hospitalization, 27% of the patients were less able to take care of themselves than before going through the disease, especially the elderly men, but also at other ages. “The association between having a complication and poorer self-care ability was maintained regardless of age, sex, socioeconomic status, and the hospital where the treatment was received. Neurological complications were associated with the greatest impact on this ability.” , pick up the text.

The profile of the participants

All these data were collected by the nurses from the different hospitals, who also collected information from the participants such as their age, sex, and ethnicity, as well as the presence of comorbidities of those affected, that is, previous health disorders. In total, about 70,000 people participated in the study, although almost one in three of the collaborators died during their admission.

“Complications were more frequent in men than in women, with men over 60 years of age being the group most likely to have at least one complication,” the analysis specifies. In terms of ethnicity, white and South and East Asian people had “similar rates” of problems, but black patients had higher rates of difficulties.

Better understanding of the disease

“Our review highlights some insightful patterns and trends that can inform health systems and policy makers of responses to the impacts of COVID-19,” comments Professor Ewen Harrison, joint lead author from the University of Edinburgh. They can also report on “the risk posed by” disease to younger, otherwise healthy people at the population level, particularly in regards to the importance of vaccination for this group, “adds the scientist.

In this sense, there are more and more expert voices that speak about vaccinating these groups as the objective that governments’ communication and awareness strategies should pursue. At the moment in Spain this process is already beginning, and some under 30s are already receiving the first doses. All this in a context in which they are precisely the groups with the highest cumulative incidence and that represent the largest number of infections.

Therefore, as Aya Riad, another of the authors points out, “it is important that, with the high risk of complications and the impact they have on people, the complications of COVID-19, not just death, are considered” at when making policy decisions to address the pandemic. “Only focusing on death” from the disease “is likely to underestimate the true impact, especially in younger people, who are more likely to survive severe COVID-19,” concludes the researcher from the University of Edinburgh.