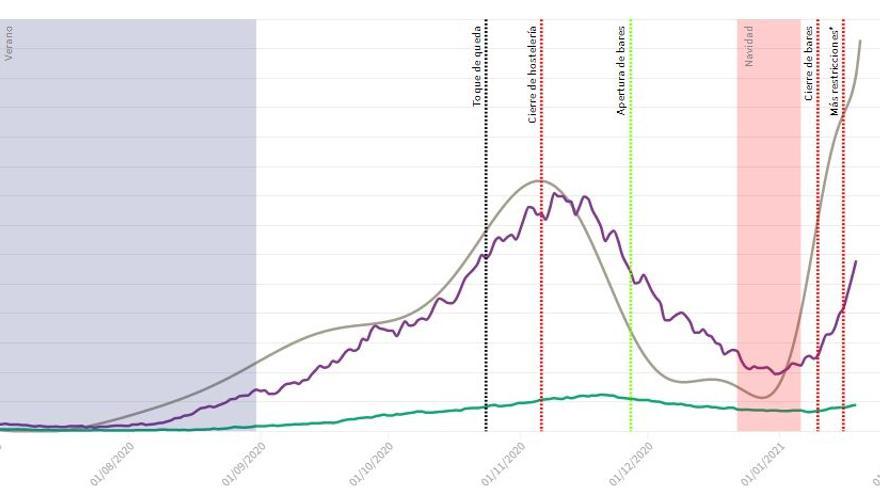 “More than a slope, it is a true vertical. It is almost a wall.” This is how the Minister of Health of Castilla y León, Verónica Casado, spoke of the contagion curve registered in the community in recent days. Except for the weekend, more than 2,000 daily cases of COVID-19 have been reported in the last seven days. Since the beginning of the year, Castilla y León has recorded 26,500 infected with a disease that has a fatality rate of 3.5%. That is, for every 1,000 infected, 35 people die.

The second and third waves are very similar. Family and friends gatherings during the Christmas holidays and a greater contagion of some strains of coronavirus has caused a “vertiginous” rise in cases, which has already begun to take its toll on the Community’s hospitals.

The graph that opens this information and its equivalents by provinces show the trend of confirmed cases daily – an ‘average’ that compensates for the ‘weekend’ effect – and COVID-19 patients hospitalized in the ward and in the care unit intensive. The cumulative incidence is now 1,048 cases per 100,000 inhabitants and has tripled compared to January 6.

The province of Segovia has been in excess of 1,000 confirmed cases per 100,000 inhabitants for eight days, and Ávila and Palencia have had such a high incidence for five days. Valladolid has been over a thousand cases for three days and, although Burgos is the province of Castilla y León that is less bad, its incidence has been rising for eleven days.

At the moment the scheduled surgical activity is maintained, but the counselor already warned on Tuesday that, if the trend continues like this, only critical patients or those with the highest priority, such as cancer patients, will have to be operated on. Of the 160 usual operating rooms throughout Castilla y León, more or less 120 are operating. This means that ICUs are increasingly widespread and are forcing a reorganization of scheduled surgery due to the high occupancy of COVID patients. According to Transparency data, there are 328 patients in the ICU, of which 191 have coronavirus; and 1,289 patients with COVID are in the plant. One in four hospitalized in Castilla y León has COVID-19. Just ten days ago, these figures were cut in half, with 514 hospitalized on the floor.

In fact, Health is evaluating the viability of opening more positions in the pandemic hospital located in Valladolid, the old Río Hortega that has now been renamed the ‘Rondilla building’. This decision will depend on the reorganization of health personnel, since the workers’ pockets are empty.

The municipalities with the highest cumulative incidence are Guijuelo (Salamanca) and Valdestillas (Valladolid), with 6,337 and 5,964 cases per 100,000 inhabitants (14 days), respectively. However, the traceability of the cases must be taken into account. A high incidence of cases in small municipalities may be distorted due to outbreaks that involve many people but are ‘controlled’ and with high traceability, as in the case of Carbonero el Mayor, a small Segovian municipality with a controlled outbreak, but a triggered incident. Castilla y León publishes the incidence in municipalities with more than a thousand inhabitants, but even a small outbreak can raise the statistics.

However, in some towns such as Tordesillas, which does not reach 10,000 inhabitants, the incidence is very high and traceability is very low. This has forced Health to carry out massive screenings, in which 105 Valladolid people from this basic health area have tested positive. 2,860 tests were performed, so the percentage of positivity is 3.6% only in those two days, with asymptomatic population. The following table shows the ranking of the municipalities with the highest incidence.

Faced with this situation, the Junta de Castilla y León has implemented restrictions in recent weeks, although at first they were only taken in Ávila, Segovia and Palencia. The 10th of January the interior of the hotel industry, gyms, shopping centers and large commercial areas in these three provinces were closed. In addition, the Board announced the perimeter closure of the Community for the duration of the state of alarm, in principle, until May.

Days later, these limitations were extended to the rest of the provinces of Castilla y León: on January 13. Two days later, the Board decided to buy time from national politics and brought forward the curfew at 8:00 p.m. – since October 24, the limit was at 10 p.m. In addition, meetings were limited to a maximum of four people – not living together -, the provinces were shielded to prevent mobility and groups in places of worship were restricted to a maximum of a third of their capacity, up to 25 people.

All these measures were almost forgotten and all the lights were put on the early curfew. Other autonomies asked the central government to put a curfew at 9 or 8 pm, but Castilla y León took the law “to the limit.” Mañueco and Igea understand that article 5 of the state of alarm law speaks of ‘limitation in night hours’, which is from sunset to dawn. Despite the fact that the Government warned that this possibility “did not fit” in the law, Castilla y León maintained its position and is now mandatory. The Supreme Court will have to decide what happens, since the Government appealed this advance despite the fact that now it is more favorable to negotiate it with the autonomous communities.