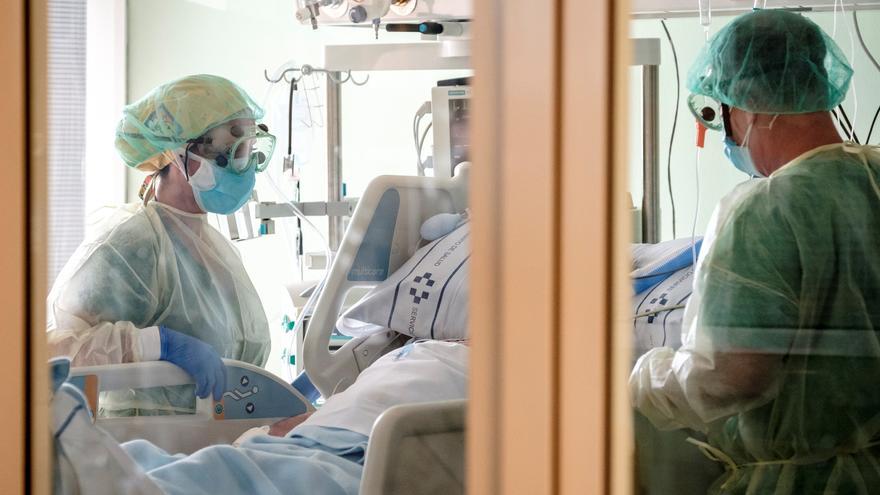 A total of 264 workers of the Insular University Hospital Complex - Maternal and Child (Chuimi) has scored a positive result for SARS-CoV-2 infection so far this year. This is reflected in the latest internal report of the center, which also specifies that 19 of these employees were diagnosed in the 24 hours prior to the preparation of the document. According to sources consulted by this newspaper, most of those affected are health workers.

Given the healthcare pressure that the center supports as a result of the growing arrival of patients suffering from coronavirus, Right now there are four enabled plants: the 5, 7 and 8 of the Maternal Infant of the Canary Islands and the 11 of the Insular. It should be noted that the north wing of the latter was enabled yesterday with the purpose of alleviating the pressure suffered by the Emergency service and gaining the capacity to admit more Covid patients. And, based on the testimony of specialists from the center, "there are already three full plants."

Until this Wednesday there were 121 positives in conventional beds, 27 in quarantine, 18 negative and three suspected of being infected. Likewise, in the Intensive Medicine Unit (ICU) there were 19 patients with Covid-19, which represents 59.3% of the capacity of the area, which has 32 beds distributed in four modules with eight beds each. In addition, since mid-December, the complex has been forced to make use of the Resuscitation and Awakening area and part of the space reserved for Major Ambulatory Surgery (CMA) to be able to assist non-Covid patients who require intensive care. This fact has resulted in the suspension of all operations, except for oncological and urgent ones.

It should be noted that last Tuesday, the center confirmed to THE PROVINCE the detection of an outbreak in the 7 South plant - dedicated to Oncohematology - which affects ten patients and one worker. Until yesterday, all those affected were stable.

For its part, the Doctor Negrín University Hospital of Gran Canaria has enabled floors 4B right, 4B left and 6B right. In total, there are 94 patients with Covid-19 hospitalized in acute beds, while another 25 remain in the ICU. In this health center it has not yet been necessary to suspend interventions, but oncological and urgent ones are prioritized.

Since the beginning of 2022, the sixth wave of the microorganism has hit the hospitals of the autonomous community with force, which have admitted an average that ranges between six and 13 Covid patients every day. The Nuestra Señora de Candelaria University Hospital Complex –in Tenerife– has had to close three operating rooms to be able to care for patients with severe SARS-CoV-2 infection. There, 221 people are in the plant and 24 are in intensive care. In addition, it has had to limit the interventions to the same cases as the Chuimi.

The Canary Islands University Hospital (HUC), on the other hand, tries to maintain surgical activity, although some interventions have already been postponed. In this hospital there are 140 patients in Covid floors and 23 in the critical area.

On the other hand, in the General Hospital of Fuerteventura there are seven patients on the ward and two in critics, although in the Doctor José Molina Orosa of Lanzarote there are 17 in the first space and another two in the ICU.

Tags: 264, Insular, maternal, professionals, they have