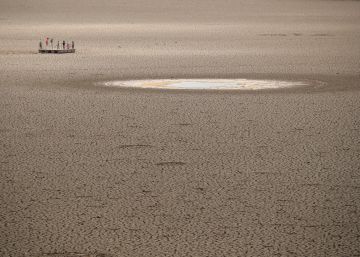 The year 2019 ends an obscure decade in the climate crisis in which the planet is immersed by the accumulation of greenhouse gases in the atmosphere, according to most scientists. This is how the World Meteorological Organization (WMO), which he presented this Tuesday at COP25 in Madrid his annual report on the state of the weather.

"2019 closes a decade of exceptional global heat, ice loss and record of sea level rise driven by greenhouse gases that expel human activities," said this organization. Two concrete data give an idea of ​​the magnitude of the problem: the average temperatures for the periods of five years (2015-2019) and ten years (2010-2019) are the "highest recorded" almost certainly. And, in the absence of closure, this 2019 WMO anticipates that it will be the second or third warmest year since there are reliable records, which start in 1850. "The general portrait will not change," said Petteri Taalas, WMO Secretary General, referring to the month that remains until the end of 2019.

This year – the data used by this organization goes from January to October – the average temperature on the planet has been approximately 1.1 degrees Celsius above the pre-industrial period. And the concentrations of carbon dioxide in the atmosphere, which overheat the planet, reached a record level of 407.8 parts per million in 2018 and continued to increase in 2019.

Taalas has warned that countries are not on the path to ensure that warming stays within safety margins. The Paris Agreement establishes that this safety limit is between 1.5 and two degrees Celsius of average increase in the temperature of the planet with respect to pre-industrial levels. If exceeded, the impacts of warming will be harder in the form, for example, of more frequent and intense extreme weather events. To meet Paris, Taalas recalled, zero net emissions must be reached in 2050, something that most countries do not assume now. "We are now moving towards a temperature increase of more than three degrees at the end of the century," said the head of WMO, a body linked to the UN. "The level of ambition has to be higher," he concluded.

One of the most obvious consequences of warming is the Rising sea levels, which "has accelerated since the start of satellite measurements in 1993 due to the melting of ice sheets in Greenland and Antarctica." In September and October, daily ice minimums in the Arctic were never seen.

The oceans have acted for decades as climate regulators by absorbing heat and carbon dioxide. But, according to the World Meteorological Organization, they are already "paying a high price." The temperature has reached record levels in the ocean and seawater acidification has grown by 26% since the beginning of the industrial era, which is damaging the "marine ecosystems," Taalas said.

Climate change is not only linked to the rise in average temperatures, but also to extreme weather events. For example, floods such as those experienced in 2019 in central United States, northern Canada, northern Russia and southwest Asia, which "received abnormally high rainfall." The WMO report reviews the main floods experienced during this year, such as those in Iran, which was "severely affected" in March and April.

On the opposite side are the droughts that hit "Southeast Asia and the Southwest Pacific in 2019". And WMO puts the focus this time on long-term drought calls. An example is Australia, where many inland areas have been experiencing a deep drought since 2017. In the case of the central zone of Chile, the report notes, there was another year "exceptionally dry".

Heat waves are also part of the summary presented Tuesday. This phenomenon especially hit Europe in June and July. "In France, on June 28 a national record of 46 degrees Celsius was set"; temperatures never seen in Germany (42.6 degrees), the Netherlands (40.7), Belgium (41.8), Luxembourg (40.8) and the United Kingdom (38.7) were also reached.

WMO also takes stock in its report of the impacts of extreme events on human health. And remember, for example, that the heat wave in Japan in July meant "more than 100 deaths and 18,000 hospitalizations." In Europe, the case of the June heat wave and the deaths recorded in France and Spain are mentioned. But the deadliest was the second, that of July. "In the Netherlands, the heat wave was associated with 2,964 deaths, almost 400 more deaths than during an average summer week."

Regarding food security, the dry periods lived in Africa will make "regional cereal production approximately 8% lower than the average of the last 15 years." "It is expected that 12.5 million people in the region suffer severe food insecurity until March 2020," warns WMO, which notes that it is 10% more than the previous year.