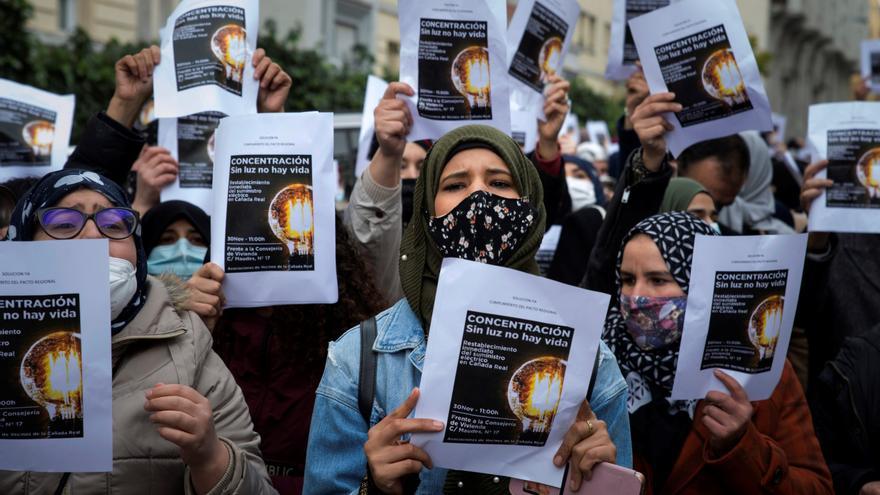 SOS to the Ombudsman. The Coordinadora de Barrios de Madrid, representing neighborhood and cultural associations of Cañada Real, has sent an emergency letter to the institution denouncing that the blackout in the settlement prevents nearly 2,000 minors from exercising their fundamental rights. “The lack of supply is having very serious consequences for 1,812 children. The situation is unsustainable,” warns the letter, also sent to the Community of Madrid and the City Council, the two administrations responsible for providing a solution to the town and its inhabitants. The letter warns of the inaction of the institutions, which “know and recognize” what is happening “but do nothing to solve it.”

Almost three months after the first cuts, caused according to the administrations by the overload of the network by the marijuana plantations, today there is no way out on the table for more than 4,500 people who live in sectors 5 and 6 of the settlement, the most They have protested again this Thursday before the Department of Housing of the Community of Madrid. Before they were in Puerta del Sol, headquarters of the regional government, and in the Palacio de Cibeles, where the City Hall is located.

The letter recalls the fundamental rights recognized internationally and nationally for minors, and claims that “in the face of a conflict of interest” the “best interests” of children always prevail. “They can not study in houses without lighting, or complete tasks or consult electronic resources, or connect to online classes,” continues the letter, which concludes that under these conditions it is not possible for the best to exercise their right to education “under conditions equality with other children “. The signatory organizations assure that on occasions the minors have stopped going to school because “they have not been able to clean themselves properly or have clean clothes.” The lack of light prevents electrical appliances such as the washing machine or the refrigerator from working. In addition, the difficulty of keeping the houses warm pushes, according to the NGOs, “the risk of overcrowding”, contraindicated by favoring the spread of the coronavirus.

“The residents of La Cañada belong to the sector of vulnerable consumers and in social exclusion. It is not possible to make distinctions of treatment based on the informality of the settlement and irregularity in access,” says the letter to the Ombudsman, who clarifies that the specific cuts have always been a “chronic problem” in this settlement, now “exacerbated”. The onset of the winter cold in the first week of December has multiplied the alerts of organizations and families who use diesel generators to turn on the lights. The letter also emphasizes that the illnesses have worsened and the low temperature has generated new respiratory infections. “In some cases it prevents the use of chronic home oxygen therapy, as is the case of a three-year-old girl who lives in sector 6,” the letter adds.

Among the residents there is fear that the “administrations may take advantage of this situation to carry out a forced eviction” from the settlement. The Pact for the Cañada Real, signed in 2017 between the Community and the Madrid City Council, includes a progressive relocation that has only been carried out in a small part. The regional government has provided another home to 36 families and the municipal government, to 72, of a total of 824 living in sector 6. The first commitment signed in May 2018, through an agreement, has not yet been fulfilled. give housing alternative to 150 families. One of the priority measures of the agreement was a plan for the rehabilitation of the electrical network that has only been fulfilled in the first phase: prospecting for data to find out the technical situation of the installation.

Ayuso and Almeida ask the Government Delegation to act

While the NGOs send warning signals to the institutions and thousands of people spend their nights without electricity, the president of the Community of Madrid, Isabel Díaz Ayuso, has referred to the problem in the Madrid Assembly in these terms. “To have the Porsches parked there, fine; to pay the bills, which is what is causing these cuts, no,” said the leader of the PP after linking the cuts with the overload for the cultivation of marijuana carried out by the mafias . For the leader, “one thing is to criminalize poverty” and another is “another to democratize crime.” “If for you Otegi is a man of peace, these criminals will be agronomists who will be doing some kind of study there in the Cañada Real,” Ayuso has ironized, addressing the spokesperson for United We Can in the Assembly, Isa Serra, who has carried out the question.

Vox already used similar arguments to agitate xenophobia in one of the concentrations called by the neighbors in front of the Madrid City Council. Councilor Javier Ortega Smith asked in a video that “help the Spaniards who do not make ends meet, the” honest people “and not” those who squat, steal electricity and pretend to live on subsidies. More Madrid took these statements to the Prosecutor’s Office for a possible hate crime.

The Community of Madrid and also the City Council defend that it is “the Government Delegation who has to act because as long as the Police” do nothing, it is unfeasible for these people to stop being hooked to the network. “Most of the families of La Cañada Real does not have the electricity regularized. The municipal spokesperson, Inmaculada Sanz, has tried to confront Ayuso’s statements, assuring that “you have to tell the truth to the citizens” if there are “situations that are not legal.” The thing is that solutions have to be adopted, “Sanz said after the Governing Board.