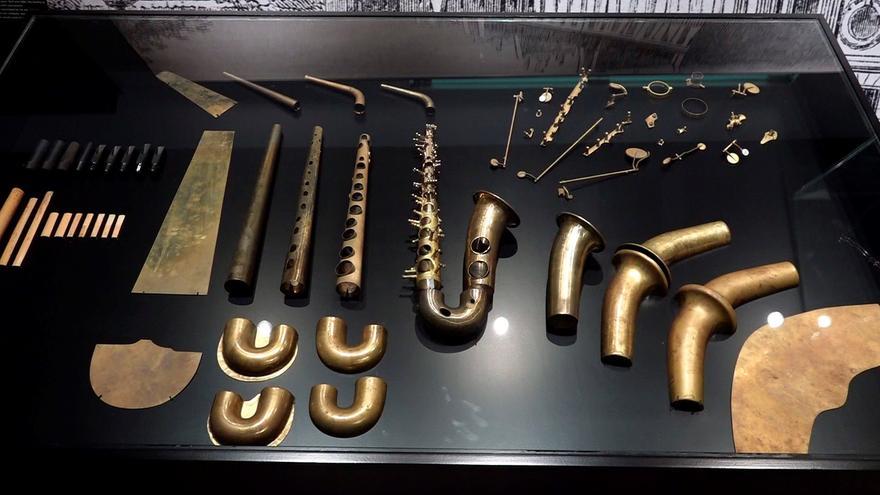 Brussels, Apr 14 (EFE) .- 180 years ago Adolphe Sax, in 1841, a Belgian instrument manufacturer, played his new invention in public for the first time in Brussels, which he called the saxophone, although he did so behind a curtain because not he had finished it or had a patent.

Almost two centuries later, the Museum of Musical Instruments (MIM) in Brussels preserves the oldest saxophone dating from 1846, the year in which Sax was able to patent it. Made of brass and with a structure practically the same as those used today.

The curator of the wind instruments section of the MIM, Géry Dumoulin, explained in an interview with Efe that Sax took several years to develop this instrument, but “when it reached the market it was almost perfect”.

Dumoulin noted that there were some later improvements made by Sax himself and other saxophone makers, however the original form from nearly two centuries ago remains basically the same.

The 1846 saxophone was recently included in the museum thanks to a loan from the King Baudouin Foundation, which acquired it in 2020, since it previously belonged to a private individual who had bought it on the free market at the beginning of this century.

“It is not known when was the last time someone played this saxophone,” said Dumoulin, who explained that in other instruments of this type, the date on which they were used can be estimated based on its mouthpiece, which can be replaced.

Specifically, the saxophone is a hybrid between a metal and a wooden instrument because it has a brass body and its reed mouthpiece, the latter being the same as that of the clarinet.

This characteristic is due to the fact that Sax was a clarinet player and his objective was to improve this instrument, although with the advancement of his research on the clarinet he managed to create the saxophone.

Sax also invented other instruments such as the saxhorno or the saxtuba, from the family of brass instruments, in addition to making more than 40,000 instruments throughout his life, according to Dumoulin.

THE SAXOPHONE IN THE “JAZZ”

Sax developed much of his career as an instrument maker in Paris, and from France musicians spread the saxophone throughout Europe before crossing the Atlantic to reach the United States, where it became popular in jazz bands.

“It is a very expressive instrument, almost like the human voice, so it seemed that in a certain way it was designed for ‘jazz'”, stressed Dumoulin, although Sax did not know this musical genre because he died in 1894, before this style became widespread in the early twentieth century.

The figure of Sax was so relevant in Belgium that his image and that of a saxophone appeared on the 200 franc banknotes, as well as the silhouette of his hometown Dinant, in southern Belgium.

Adolphe Sax’s vocation to create instruments arose from the influence of his family, his father and brother, and later also his son, who were manufacturers of musical instruments.

In the MIM, more than 130 instruments of the Sax family are preserved, including trumpets, saxophones, trombones and clarinets, produced by his family business that managed to position itself among the most important manufacturers of instruments of the time.

In the beginning, the manufacture of the instruments was carried out completely by hand, however, with the increase in demand, their production was more industrial, since they had about 200 workers and a large factory.

The museum exhibits a journey through the history of this family and their contributions to music, and after almost two centuries their instruments are preserved in good condition thanks to the control of light, temperature and humidity in the exhibition rooms and in the deposits, since as Dumoulin pointed out, there are more than 10,000 musical instruments in total and only 1,200 are on display.