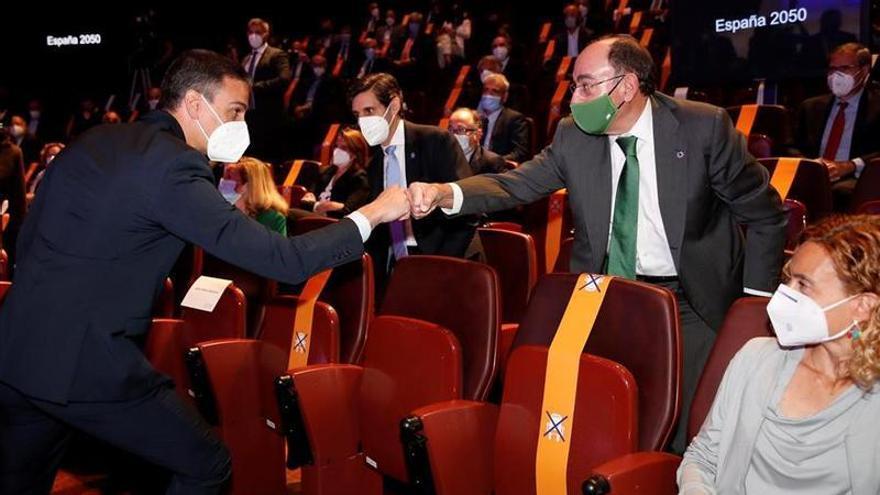 The pulse between the Government and large electricity companies, especially Iberdrola, continues due to the Executive’s cuts to their remuneration, in parallel to the historic escalation of the wholesale electricity market due to the stratospheric rise in gas. This Monday marks 150 days since May 28 hostilities were opened by transcending the intention of the Executive to cut the so-called benefits fallen from the sky that companies receive due to the rise in the price of CO2.

What began as a more or less underground confrontation has ended in open war, as the spiral of increases in the famous pool grew unstoppable, and with the country’s leading electricity company, Iberdrola, and its chief executive, Ignacio Sánchez Galán, as visible head of a disagreement that has been growing.

In these almost five months, the large companies in the sector have threatened a early shutdown of nuclear power plants; They have been accused of emptying reservoirs to maximize their profits; have announced the investment stoppage; they have deletion of the last renewable auction or they have used the price increases to the industry as a bargaining chip to try to neutralize the cuts.

The last episode was lived on Thursday. “One is the owner of his silences and a slave to his words” and “there will be many people who will consider Mr. Galán an extremist,” said the president of Iberdrola Teresa Ribera in an interview in The Newspaper of Spain in which he affirmed that it is necessary to “claim from the electricity companies the social commitment that appears so much in their memoirs and in their advertising.”

Hours later, the Basque multinational fought back. In an unusual statement, he urged the government to withdraw the Royal Decree-Law that was approved a month ago, already endorsed by Congress, to tackle the overpayment that, according to the Executive, companies receive due to the effect of the rise in gas in the wholesale market. Iberdrola demands no longer qualify the decree, as Ribera has promised, but the “withdrawal” of that rule that, he assures, contains “harmful taxes” and obliges companies to return 1,000 million euros per month.

After the announcements of shutdowns of about a dozen factories due to high energy prices, the Basque electricity company offers in exchange for the withdrawal of the decree “not to vary the electricity prices to the industry so as not to affect Spanish competitiveness.” “Everyone can be wrong due to lack of information and rectification is wise,” he assures.

The supposed error of the Government to which the company refers would be that drastic cut in income to hydroelectric, nuclear and some renewables (the oldest) through a temporary reduction mechanism that will be in force until March and that Ribera has offered to clarify if the utilities guarantee “reasonable prices” to the industry through long-term contracts that would save themselves from this revenue detraction.

The decree seeks to comply Pedro Sánchez’s promise to close 2021 with electricity prices similar to those of 2018, which the President of the Government himself reiterated this Friday that it will be fulfilled, reducing by 96% the regulated part of the receipt set by the Executive, the charges (with greater weight in small consumers), with a cut that Ecological Transition encrypted in September at 2.6 billion. But Ribera herself has recognized that the rise in the price of gas has pulverized her forecasts.

Thus, if in mid-September the reference of the Iberian market Mibgas was around 63 euros per megawatt hour (MWh), in October it has far exceeded 100 euros. The cut to electricity generators would thus exceed 5,000 million, according to the companies, which also fear that the measure will go beyond March. After the winter, the international gas price is expected to relax. But electricity futures point to very high prices until 2023 at the earliest.

The electricity companies cried out a year ago against the destruction that, they claimed, was causing for the nuclear the collapse that the wholesale market suffered in 2020 as a result of the pandemic. And now that the pool is at levels never seen before, they assure that they have sold 100% of their base production (nuclear and renewable) for 2021 and a percentage higher than 75% of that of 2022 for months, at very low prices. lower than the current ones, which no one anticipated six months ago.

Ribera, which has influenced the lack of transparency of these contracts and the low weight of long-term supply agreements in the industry, is studying ways to exclude generators with bilateral agreements at prices that will necessarily be very high from the reduction mechanism. lower than more than 200 euros / MWh of what, on average, we have in October.

The minister opened up to qualify the decree after the warnings of the PNV, a preferred partner of the Government historically linked to Iberdrola, after a round of contacts prior to approval and in view of the “grossly incongruous“Brussels proposals in the face of the energy crisis. EU leaders have postponed possible solutions, at the earliest, until December, with Spain leading the pressure to reformulate the marginalist price formation system, whereby the last power station that matches supply and demand marks what the rest charges. European power companies have put pressure on several European governments by letter so that the cuts applied in Spain are not extended to other countries.

The penultimate episode of the conflict has been the decision of Iberdrola and Endesa not to attend the auction of renewables last Tuesday, after Ribera trusting that it would be “a good sign” for the Spanish economy “in a complex context”.

After the establishment of the two large and “in the most complicated circumstances that we have experienced in recent years,” according to the minister, for the first time in a call of this type, the entire auctioned quota was not covered. 95% of the planned power, 3,123 megawatts (MW), was awarded at a price of 30.56 euros / MWh. Light years from the current and future price of the pool, but more than 20% above the previous auction in January. A “reasonable” toll, according to Ribera, taking into account current inflation in the capital goods and raw materials industry.

In the photovoltaic sector, the absence of Iberdrola and Endesa has not been surprising. By providing long-term revenue visibility, these auctions are especially interesting for operators who need financial backing for their projects and may lack the muscle of the large ones, which can also close long-term contracts at higher prices. The gap between Iberdrola and Endesa has been covered by operators such as Capital Energy (that already swept the January auction) and the Aragonese Forestalia, which in previous calls was one of the big winners, although later sold a good part of its portfolio of projects.

The Enel subsidiary has already indicated in the past that it does not agree with these calls well understand that they are not necessary. Iberdrola, which already announced the stoppage of investments in Spain in September, has made it clear that it has not attended due to the legal uncertainty that, it claims, exists because of the [en palabras de Galán] “terrifying interventionism” of the government.

The day it took off the auction, Iberdrola announced an investment of 7.2 billion in offshore wind power in the United Kingdom and distributed a photo of Galán with Boris Johnson, although two days later, his subsidiary Scottish Power charged against the price caps they have there the marketers, which he claimed, are going to provoke a “massacre” in the sector if the British authorities do not act.

While the future of the controversial decree-law is being clarified, another front of this game is played in Congress, which has on the table the aforementioned bill to reduce excess benefits from CO2, still in the amendment phase. The text seeks to cut, in this case permanently, the extra income to the plants prior to 2003 (basically, hydroelectric and nuclear), which benefit from the rise in carbon emission rights, which they do not support, and whose price this year it has reached over 60 euros per ton, triple the average of recent years.

The bill was approved in early August, on the eve of the controversy over the “scandalous” discharge of hydroelectric dams managed by Iberdrola, and while news rained on how this technology marked the most expensive offers in the wholesale market. After open the door for a public company to manage the concessions expired, the Government opened several information files and invited the companies affected by the CO2 cut to return the affected hydroelectric concessions to the Administration if they understand that they are not going to be profitable.

The power companies described in June as “confiscatory” the proposal to reduce CO2 benefits. Then they already proposed to advance the staggered closure of the nuclear plants agreed as of 2027, a threat that they repeated in September, by ensuring that this bill and the government decree led to a “disorderly” closure of the plants. Until a few days ago, they planned a simultaneous shutdown of up to three reactors in November, when one of the two pipelines supplying gas to Spain from Algeria will most likely be closed, which will add even more pressure to the price of electricity.

It is almost a tradition that with each major electrical reform, the sector qualifies the measures as “expropriation”. That word was already brought up by the chief executive of Endesa after the arrival of Podemos to the Government to reassure investors: “They are not going to expropriate us,” José Bogas said at the time. And in 2012, before the reform that then approved the PP of Rajoy, the then president of the Unesa employer’s association, Eduardo Montes, already used it to abronar in the middle of public streets and after an act in Madrid to the then director of Energy Policy of the Ministry of Industry, Jaime Suárez. Now, they have again alluded to the expropriation of power company managers and in public, and Pablo Casado himself as soon as the Royal Decree-Law of September was approved.

With Unesa reconverted into Aelec, the toughest role against the Government has been assumed by a Galán, who is responsible for hiring former socialist councilor Antonio Miguel Carmona in full quarrel with the Executive as vice president of its Spanish subsidiary. The man from Salamanca, a great hunting fan, has not been daunted after his indictment in the Villarejo case shortly after serving 20 years as an executive of Iberdrola, and shoot to kill. Swords remain high as Brussels delays measures to tackle the biggest energy crisis in half a century.