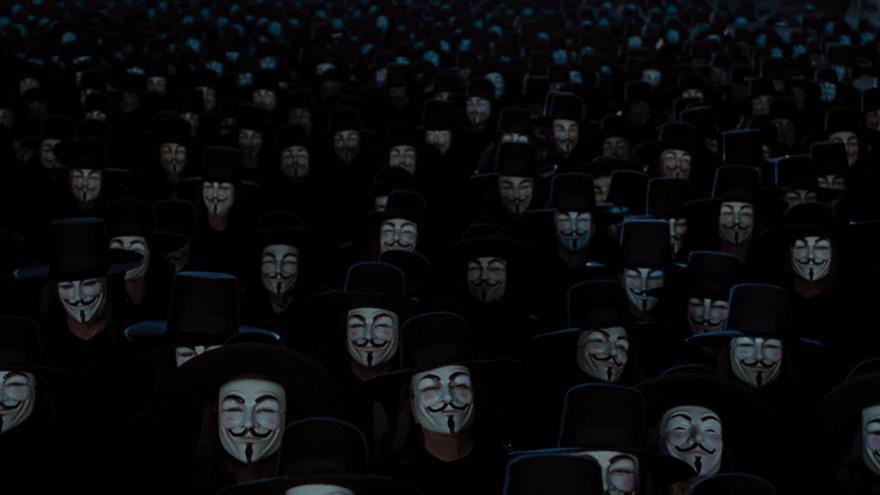 Masked avenger meets girl. And it turns upside down, using targeted assassinations and gestures of agitation, a future England turned into a Nazi dictatorship with echoes of the dystopian novel 1984. That would be, roughly, the synopsis of v for Vendetta, film adaptation of the classic comic by Alan Moore and David Lloyd. In its incarnation on paper and ink, it was one of those comics that contributed to raising the consideration that the medium received in its most popular aspect, along with works such as Watchmen (scripted by Moore himself), Return of the Night Lord or Sandman.

The translation of v for Vendetta to the cinema was a long-term project. It had been in the drawer of the mighty Joel Silver for almost 20 years, a movie classic eighties what has produced Lethal weapon, Predator, The jungle of crystal or Matrix, among many other titles. The creators of this latest saga, the Wachowski sisters, finally acted as scriptwriters and producers. The direction was carried out by a regular collaborator of the duo, James McTeigue, who would later also sign other projects under the sisters’ libretto.

The result caused the understandable detachment of the creator of the original work, because quite relevant changes were incorporated in the letter and in the spirit of the work. They were debatable changes that don’t have to sour the enjoyment of the movie. After all, the endeavor worked and it became a classic of futuristic fantasy. And in a celebratory, pyrotechnic (and explosive) reference, of that pop cinema that stuck its finger in the eye of the Bush-Cheney administration in the midst of the offensive of wars against terror and patriotic laws that compromised civil rights.

Like period drama Good night and good luck, v for Vendetta it was a call for the acceptance of divergent thinking, a critique of the criminalization of dissent. In this case, it included melee fights and slaughtering with sharp objects. The play was also a warning against those who want to exploit our fears. Fifteen years after its premiere, its mark lingers in unexpected ways. The costume worn by its anonymous protagonist, V, is an icon for protesters around the world who hide his face behind a mask that has become a universal sign of discontent.

v for Vendetta He anticipated the futuristic fantasies that were conceived after the 2008 financial crash: he coincided in projecting a certain sympathy for revolutionary acts against fictional political systems. Works like In time or Elysium they anticipated terrible futures of radical social fracture, with the consequent (armed) resistance. Both drank from the cyberpunk narrative, a trend that was on the rise when Ronald Reagan and Margaret Thatcher ruled the Anglo-Saxon world … and when Moore conceived V and Evey. In the wake of the economic crisis, several science fiction authors treated with renewed interest issues such as strongly unequal access to technology, figures such as hackers liberators …

The McTeigue and the Wachowskis’ proposal, in any case, was not infused with images of extreme economic inequality. It had more to do with the management of the traumatic attacks of September 11, 2001 than with a general criticism of the current system. The authors portray an openly neo-Nazi government, led by an almost caricatured Hitler ruler, who rehearses a very radical and totalitarian patriotic closing of ranks. This kind of Reich british employs a powerful and ruthless propaganda and repressive apparatus, reminiscent of the aforementioned 1984. Visual references to Nazism are interspersed with comments on current affairs of the moment: detainees are blinded by bags over their heads that refer to the horrors of Guantanamo or of Iraqi prisons under US control.

The motivations of various characters cause the audiovisual V for Vendetta to be, above all, a nightmare of loss of individual freedoms, whether in the sexual or religious sphere. Was a blockbuster with LGBTI sensitivity that pointed out the Islamophobia and homophobia of neo-conservatism and the American evangelical right. He did it a decade later after the prophetic 2013: rescue in Los Angeles. In it, veteran John Carpenter anticipated the post-9/11 future years before the World Trade Center was brought down.

Carpenter, who matured in the days of the counterculture and opposed economic neoliberalism in the memorable fantasy action film They are aliveHe did not need to dress the political adversary in the guise of that default pop villainy that is Nazism. Through 2013: rescue in Los AngelesHe pointed directly at a very exclusive right hand that uses the Bible as a throwing weapon. It could be said that The night of the beasts and its carpenterian sequel took the witness by representing an enemy a little closer to reality (between several quotes: see the extreme makeup that caricatures the murderous oligarchs that appear in Anarchy: Night of the Beasts).

Perhaps such a clear approach would have been more to the liking of Moore, who criticized his comic becoming “a Bush-era parable made by people too shy to place a political satire in their own country.” And yet, a political value can be seen in the v for Vendetta audiovisual. Although it turns its murderous and torturing protagonist into a too little shady hero, although it shows a collective action very subject to the initiative of an individual leader, among other possible considerations. Be that as it may, it is one of those rare Hollywood productions where a mass demonstration is not portrayed as vociferous chaos, but rather is identified with a legitimate uprising (we will see something similar in a later Wachowskian work: Atlas of the Clouds). And this takes place in a fictional future, yes, but it is located in the strategically nearby United Kingdom, instead of being located in kingdoms invented or seen as third world.

The mass that we see in the film maintains a certain threatening component through the powerful image of hundreds of masked people. For once, this force of the group is not demonized but comes to vindicate itself. Because, as V affirms, “the people should not have their governments, the governments should fear the people.” Although, as suggested in the Watchmen of Moore, it should also be possible to keep an eye on the watchman.