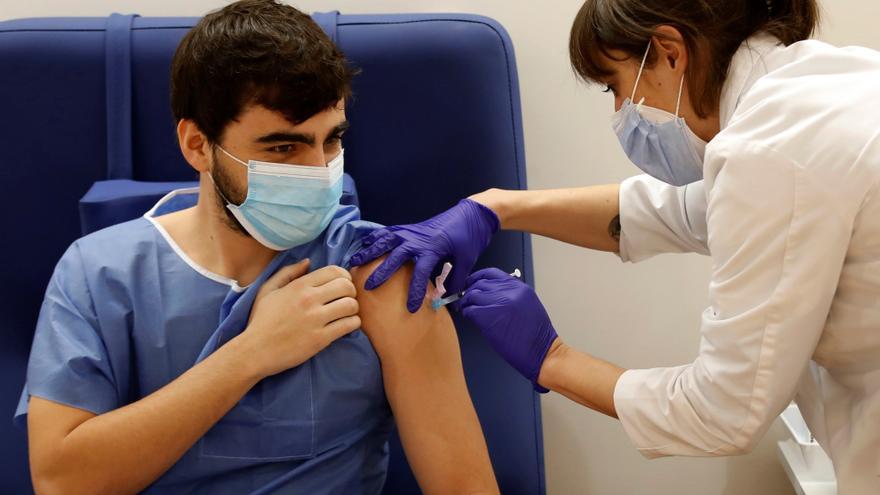 The autonomous communities have already administered 406,091 vaccines against COVID-19, 54.6% of those received since December 27, according to the latest data updated by the Ministry of Health as reported by the regional health ministries. There are 128,000 more doses than those notified on Friday, when 277,976 (37.4%) had been placed, after this Saturday and Sunday through the center of the Iberian Peninsula the storm Filomena passed and mobility collapsed in much of the Central Plateau. Some of those 128,000 doses could have been put in before the weekend, depending on how it was registered in the system.

Since the immunization campaign against COVID-19 began on December 27, Spain has obtained 743,925 vials of the one from Pfizer / BioNTech, the only one our country currently has. Health does not count in its report this Monday the 350,000 that have arrived this same January 11 in the morning in Barcelona and Vitoria and that have begun to be distributed throughout the territory, with the difficulties added by the storm. In fact, part of the shipment should also have landed in Madrid but the logistics plans have changed “given the weather situation.” At the end of this week it is expected that doses developed by the Modern pharmaceutical company, approved by the European Union on January 6, will begin to arrive. It will be 600,000 in 6 weeks, less than Pfizer, of which it will be 4.5 million in 12 – every Monday. The EU will also decide on the Oxford University / Astrazeneca project at the end of January.

The Community of Madrid, where Filomena has hit the most, continues to be the slowest immunizing after this weekend. He has administered 24,897 doses, 25.2% of which he has (which is 98,790). On Friday it had put 14.3%. Cantabria, which on Friday was the second that had administered the least dose, 19.7%, has made a great advance and this Monday it already has that it has vaccinated with 71.5% of those it has. The second region that has proportionally vaccinated the least is the Balearic Islands, it has placed 4,652 of the 12,840 it has, 36.2%. And the one that goes the fastest is still Asturias: it has put 18,943 out of 23,720 doses received, 79.9%. This Sunday, according to the Pfizer trial calendar, the second dose should begin to be administered to the first vaccinated people on December 27 –as Araceli Hidalgo, in Guadalajara-, they are put with a difference of 21 days for the complete protection against the virus of the patient.

The director of the Center for the Coordination of Health Alerts and Emergencies of the Ministry of Health, Fernando Simón, has expressed that Filomena may cause “a certain delay” and “impact” in the vaccination process, also “specific problems” or “somewhere concrete ”very affected, where“ the desired program is not fulfilled this week, but it can be recovered in the following days ”. But the impact of the storm expected to be “not excessive” on this, the indication for him that it will be so is that in the national count on Monday, the rate of immunization compared to Friday “has not suffered.” For Simón, the key is that currently the vaccination is mainly in residences, “they are places to which the health workers already have to move” per se. Although in Madrid this week appointments for vaccination of Primary Care professionals have been canceled, due to the complication of moving between centers.

Vaccination started very slowly last week, Madrid and Cantabria had only used 5 and 6% of the sera they had. On Friday, both the Minister of Health, Salvador Illa, and the Minister of Territorial Policy, Carolina Darias, who is being considered to replace him once the former leaves office to be the PSC candidate for the Generalitat, valued the campaign after the meeting of the Moncloa coronavirus monitoring committee. Darias specified that the goal is “to have more people vaccinated than infected as soon as possible” and Illa pointed out that the pace “still has to improve”, but “it is picking up speed.” In this first phase, from January to March, the goal is to vaccinate all users of residences, toilets and large dependents. As of March, it is intended to reach the rest of the population groups, up to 70% of the total population in summer.