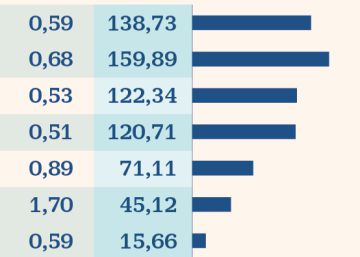 The uproar on Wall Street with the rally of GameStop and AMC after the entry into action of small investors – and which has caused millions in losses in hedge funds that maintained bearish positions on both listed companies – has put the strategy on target to bet against a certain value. This formula, which during the harshest months of the pandemic was vetoed by European regulators, including the CNMV, to avoid disorderly price movements at a time of extreme volatility, came into action again in mid-May. But in the United States, where it was not restricted, it is taking on a new dimension these days given the strong presence of bearish hedge funds in the capital of many companies.

The Spanish listed companies are not getting rid of bearish investors, although at an enormous distance from Wall Street. According to the data sent to the CNMV, the hedge funds maintain short positions in the capital of 18 firms that at market prices are valued at 1,004.65 million euros. The funds are obliged to notify the regulator of short positions equal to 0.1% of capital, although the CNMV only publishes those that exceed 0.5%.

Unlike what happened in the United States, in the case of the Spanish Stock Market, bearish positions are not limited to small stocks, whose price is easier to alter, but rather prominent ones are included within the group of firms affected by this investment strategy. members of the Ibex 35 such as Amadeus and Cellnex, the fifth and sixth firm of the selective by capitalization with a value of 23,670 million and 23,510 million, respectively, far from the little more than 1,300 million that GameStop was worth at the beginning of the year.

The other point that is far between what happened on Wall Street and what happened in the Spanish market is the fact that the percentage of capital in the hands of the bears is much more limited. The Spanish listed company with the most shares owned by hedge funds is Audax, with 5.63% of its capital (about 51.8 million euros), a proportion that is light years away from 140% of the shares in GameStop circulation that bear investors came to have in January, according to Bloomberg, citing the firm S3 Partners as a source.

Traditionally, listed banks have been the banks most affected by bearish operations on the Spanish Stock Exchange. A good example of this was what happened with Liberbank. In June 2017 and after the entity fell 50% on the stock market in just 10 sessions as a result of downward pressure, the CNMV decided to take action on the matter to stop the bleeding and banned bearish bets for a month. Currently, the only bank with short positions is Sabadell, with 2.55% held by Samlyn Capital (2.06%) and Citadel Europe (0.49%).

In addition to Cellnex, Amadeus, Audax and Sabadell, the list of listed listed companies that bearish investors wish for are Siemens Gamesa (0.53%), Solaria (2.29%), Acciona (0.66%), Red Electricity (0.51%) and Enagás (0.69%), firms that performed well on the stock market in 2020 and that belong to two sectors (electricity and renewable) that are fashionable in the markets. At market prices, these positions they add up to 181.6 million.

It is a stock exchange operation that consists of betting on the fall of a certain value. Short positions involve selling an asset with the idea that the price will decline and then buy it at a lower level. When opening a short position, the securities are borrowed from a third party, usually a broker, and then sold. The loan occurs automatically when opening the position. On the Spanish Stock Exchange, the most active funds in this type of operation are AKO, Citadel, AQR Capital and Marshal Wace.