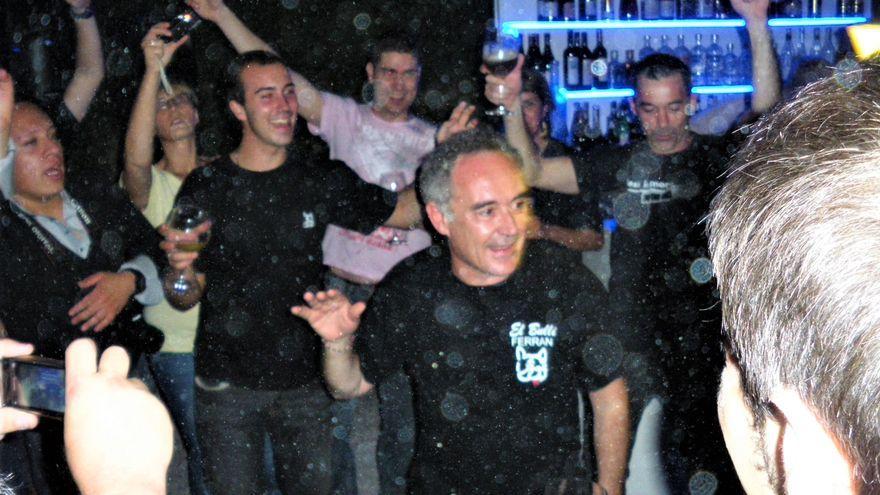 Time is a three minute song of the Ramones. Three minutes ago it was the July 30, 2011 Y The Bulli, the most influential restaurant in contemporary history, was about to provide the ultimate service, with Ferran Adrià and Juli Soler in front.

Juli also died four years later one July: man and month, strangely united, like one of those jokes of the language that he was fond of.

Attend dinner, the ‘Last waltz’, as they said, with only fifty guests, it was a privilege, the opportunity to say goodbye to the most decisive establishment in my life and also a relief: El Bulli did not deserve the decadence and that kind of deterioration that happens in public view and from which an uncomfortable silence is kept out of respect for past glory.

Great stories deserve a great ending and that one was, already from the roster of guest chefs, golden names of the profession, if we accept the muddy international classifications and the ‘triestrellismo’.

The last team of bullinianos (the real dinner workers), bullinianos of the border and cooks that were once in their kitchens, even if only episodically. Joan Roca, Andoni Luis Aduriz, René Redzepi, Grant Achatz, Massimo Bottura, José Andrés, the recently deceased Xavier Sagristà, Albert Adrià, Oriol Castro, Eduardo Xatruch, Mateu Casañas, Carles Abellan, Albert Raurich… Weddings and funerals gather crowds and that had something of both events.

The aperitifs were on the terrace at that time when the sun was beginning to be understanding and the night, promising. Andreu Buenafuente, with whom he shared a table, also with Sílvia Abril, gave them the painting titled ‘The Last Supper’, with a Ferran with a colorful face in the role of Christ’s cook painted by Uri Martínez. Luckily, no crucifixions later.

It was not a normal or formal service, but with the relaxation of the goodbyes. And despite the uninhibited situation, kitchen and living room, led by the Lluís, García and Biosca, and with Ferran Centelles and David Seijas to the wines, they served 51 plates, among them, symbols such as the golden egg, the flower paper, the liquid chicken croquette, the cuttlefish and coconut ravioli (the dish that I had fallen in love with in the spring of 1997), the marrow with caviar, the chicken al curry and hunting cappuccino.

And the wines? Anyone you want, said Seijas, who was taking care of our table. Stunned, we leave it in their hands: the chardonnay Chassagne-Montrachetby Bernard Moreau; pinot noir Charmes-Chambertin, by Lucien Le Moine, and the tempranillo by Vineyard El Pisónby Artadi.

The dish they ended up with almost half a century of history (1962-2011) had, in turn, a narrative: it was 1846, the year of birth of Auguste Escoffier, and it was a series with different reinterpretations of the famous Melba peaches.

At this point, the guests wandered through the dining rooms and happy chaos had taken hold of that place of millimeter executions.

With the last dessert of the last dinner from the last time El Bulli was a restaurant, all the cooks and waiters, with Adrià and Soler at the helm, appeared in the first room. A woman began: “That bulli, that bulli is, is”, and the dozens of people were chanting with the rhythm of the final won. The same emotion of happy ending, without nostalgia or sadness, is what I feel as I write this memory.

The party continued in the parking lot, with drinks and a buffet for a second group of guests, and Juli Soler acted as a ‘disc jockey’, in memory of what had been one of his first occupations.

There were people who bathed in the sea and lost their glasses and other belongings and there was a cake and there was a balloon that launched a farewell message into space.

A decade later I recall the exceptionality of what I experienced, the clarity and certainty of the unrepeatable moment.