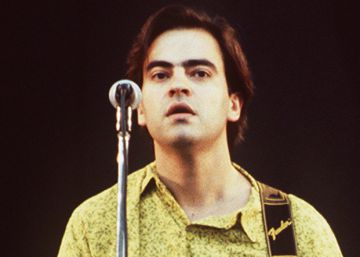 Are met 20 years after the death of Enrique Urquijo. On the occasion of this anniversary, we reviewed 10 of his most emblematic songs that can best define his career as both a singer and a composer, taking into account his best known and disseminated work with Los Secretos but also his parallel personal project signing as Enrique Urquijo and Los Problems , which also left us some of the most radiant jewels of Spanish pop. A journey of 20 years from the early eighties to his death on November 17, 1999.

The title and idea of ​​the song are based on a poem included in the book Separate rooms Luis García Montero published in 1994, which is why some attribute the entire text of the song to the poet from Granada. Actually, the song just borrowed the title. The rest, as well as the melody, belong to the Madrid singer-songwriter Quique González, declared a fan of Los Secretos that in this way signed a theme that would end up becoming a classic of Spanish pop in the voice of Enrique Urquijo. Enrique would record it for the first time for the album Since we haven't seen each other, published in 1998, with his parallel training to Los Secretos, Enrique Urquijo and Los Problems, although his brother Álvaro also participated in the song playing guitars next to Begoña Larrañaga's piano, Eduardo Ortega's violins and Amaia Sánchez Ruano's cello. A song impregnated with beauty and melancholy for which time does not seem to run and that survives in the current live shows of Quique González himself.

Without doubt the most emblematic theme of Los Secretos, included in the group's first official work, that mythical EP edited by Polydor in 1980, generically titled as the song itself. A simple and inconsequential theme, but with one of those very inspired melodies that are installed in the collective unconscious and that placed the group on the front line of what would be called the Madrid move along with groups such as Nacha Pop or Mama. In the year 2000, a collective recording of the subject will be made in which he will pay homage the flat major of Spanish pop of the moment, with voices like that of Pau Donés, Carlos Goñi, Manolo Tena, Cristina Lliso, Miguel Ríos, Carlos Tarque, Teo Cardalda, Javier Álvarez, Manolo Tena, Nacho Campillo, Mike Erentxun and others, and that would open a whole album of tribute to Enrique himself under the title By your side.

Another of the most delicious songs of the repertoire of Los Secretos would come from an unfinished text that Joaquín Sabina slipped some night of drinks in Enrique's pocket and to which some months later Enrique would add an inspired melody. The story was that of the singer who after a concert gets lost in a bar in search of someone else's coat and finally encounters lovely cat eyes behind a bar. Curiously, around that same time, Sabina forgetting that she had delivered this letter to Enrique, on the other hand, would put another Mexican tune to it, developing that yes, the last stanzas of the letter with another outcome and adding a new refrain giving rise to And they got ten. Both songs, the one sung by Enrique and the one popularized by Sabina, would coexist on the 1992 charts in perfect harmony without reproaches or guilt among the singers.

4. 'I want to drink until I lose control'

No other group or Spanish pop artist has been able to assume and mix within their influences, musics as seemingly and genuinely different as the country and the Mexican song, with the magic and personality that Los Secretos have done. Enrique, declared a fan of these two musical universes, insisted that both worlds converge on I want to drink until I lose control another of the most memorable and inevitable successes of the career of The Secrets. The song, which in the literary took much more of the ethyl excesses of certain Mexican rancheras than of the most virtuous country life of the country American, became another of the great successes of Los Secretos, back in 1986, as the first single from the album The first crossing, which started the group's references with the Twins label. Fito and the Fitipaldis would also make a very successful version of the same theme that they would include in their album Behind closed doors in 1998.

Enrique Urquijo will also hold on to the ranchera rhythm to tell this bitterly impudent story and in which Enrique talks to his daughter about some of the messes and problems that his terrible drug addiction is causing. The song that was included in a Great successes published by Los Secretos in 1996, it would become very popular and recurring on radio stations following the news of Enrique's death exposing in detail to the general public the weaknesses of a singer tormented and yet so dear to all. In 2000 a version as magical and unrepeatable as the original itself would also appear, in this case sung by Antonio Vega with Jesús Redondo on the piano and Álvaro Urquijo on the acoustic guitar that would be included in the album By your side.

Another of the essential songs of the repertoire of Los Secretos even today at the band's concerts is this “Good girl”, the song that opened the album The first crossing 1987. The theme was signed by the two Urquijo brothers, Enrique and Álvaro, and was again one of those portraits of a helpless girl fallen into the networks of the same addictions that Enrique would end up entangling. A story perhaps a bit topical and typical told in many songs of the time (Princess from Sabina, Queen of Hearts I had to write for Miguel Ríos or Through the tunnel also written by Sabina himself and recorded both by the author himself and by Los Secretos) with similar shipwrecks and morals.

Included in the disc Goodbye sadness of 1991, during this one of the sweetest periods in terms of massive success of Los Secretos this classic of the Manolo Tena and guitarist Jaime Asúa, who years ago had popularized Alarma and that in the voice of Enrique and the guitars of Los Secretos may lose punch Rocker but no emotional involvement. Tena signed several texts of this great album of Los Secretos (The hotel of love or Learning to dream) becoming during these years a regular collaborator of the group and perhaps this was the reason that encouraged the recording of this huge Spanish rock classic that in Enrique's mournful and passionate voice returned to the ears of a wide sector of the public that perhaps I didn't know the original.

Another of the historical songs included in the group's first EP, that singular debut with only four themes that placed them on the map. The song was actually a song composed by the Uruguayan Roberto Fernando Alonso and the Argentine Mario Pierpaoli and had been published with great success throughout the southern cone of Latin America back in the year 69, performed by the Uruguayan group Kano and Los Bulldogs. Somehow it would have reached the ears of the Urquijo brothers, who apply it in updating it, turning it twenty years after its composition into one of the most listened to songs during those early stages of the move also on this side of the Atlantic, although earning certain epithets such as soft and slug shot on them by groups of the most irritating batches of the movement and its fans and those that will cost The Secrets several decades to detach.

Included in your disk Change of plans of 1993, Strung up, is another of the songs that best define Enrique's songs, a beautiful part-time that at the time we thought was dedicated to his partner but that the same if we investigate a lot could also be that it was another twist to define with materials taken of romanticism and love passion his close relationship with any of those addictions that by this time already seemed to take him down the street of bitterness. The composition team also includes Íñigo Laguna, the great habitual pianist of Los Secretos Jesús Redondo and Álvaro Urquijo.

To finish the review of this decalogue nothing better than to return to another one of those unforgettable songs recorded by Enrique outside Los Secretos and rescue this classic Mexican from the great José Alfredo Giménez, whom he idolized so much and from which he would record a good handful of songs. In this case, it was also included on his disk Since we haven't seen each other recorded as Enrique Urquijo and Los Problems. An emblematic and unsustainable song of the Mexican songbook, that Enrique's intimate and emotional voice makes for the most delicious farewell piece he can dream of, with the good help of Begoña Larrañaga on the accordion, Piti on the Spanish guitar, Ramón Arroyo on the acoustics, Eduardo Ortega on the violin, Josemi Garzón on the double bass and Tino di Giraldo on the drums.

All nominations of the Goya 2020

Jordan Belfort, the man who inspired Scorsese’s “The Wolf of Wall Street,” demands the film’s producer