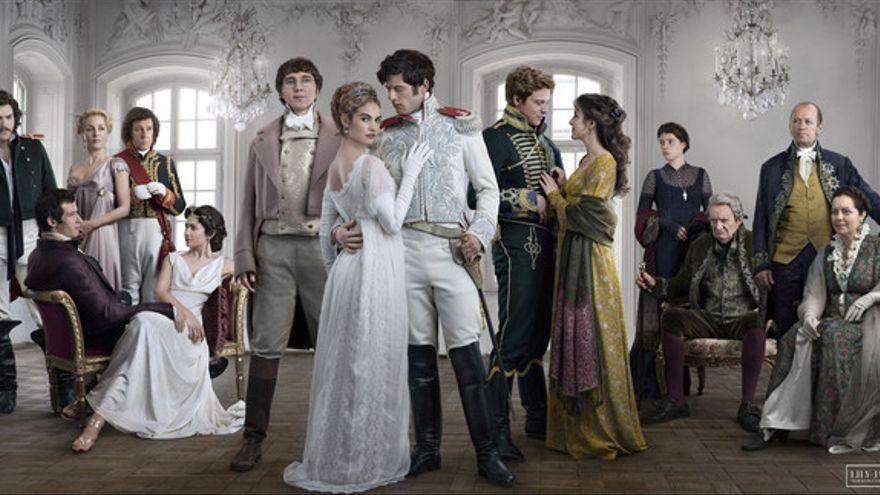 In these times, in which platforms do not stop creating content to satisfy the voracious series hunger of the audience, it is also possible to enjoy some major international productions totally free. A good option is RTVE Play, the platform of the public entity, which has just renewed its catalog. Here we review 10 great foreign series from his archive that can be seen without paying a single euro.

The classic written by Leo Tolstoy serves as the basis for this meticulous six-episode British miniseries directed by Tom harper, with a script by Andrew Davis and released in 2016. Set in 19th century Russia, during the reign of Alexander I and the Napoleonic invasion, it is articulated through the plots of five aristocratic families, putting the focus on the love triangle between Natasha Rostova (Lily james), Pierre Bezukhov (Paul Dano) and Andrei Bolkonsky (James Norton). Luxury with the BBC stamp, which could already be seen on Movistar + and Filmin.

British miniseries 'true crime' of three episodes of 2017, based on the true story of three girls who were caught in a child abuse network in Rochdale (Manchester), formed by a group of men of Pakistani origin, although the plot affected almost fifty young people . Awarded five BAFTAs in 2017 (including best miniseries and director for Philippa Lowthorpe), pulls the dirty laundry out of a case that shocked the UK, as the authorities shelved the complaints as unreliable and for fear of being accused of racism.

Based on the book 'Harris's List of Covent Garden Ladies', this British-American series aired on the Cosmo channel addresses the business of prostitution in 18th century London which, despite being illegal, was in full swing. Samantha Morton and Lesley Manville they play the owners (and rivals) of two brothels that compete to attract customers. Liv tyler ('The Lord of the rings'), Jessica Brown Findlay ('Downton Abbey') and Nicola Coughlan ('The Bridgertons') are some of the women who move in this sordid environment.

What's going on behind the scenes of a dating reality show? This is what this 10-episode series explores, released in 2015 and inspired by the award-winning independent short film by Sarath Gertrude Shapiro 'Sequin Raze'. Follow the ins and outs of 'Everlasting', a television program in which several suitors try to seduce a sought-after bachelor, although little by little the dirty laundry of the 'show' is uncovered. In 2016 she was nominated for an Emmy for best script in the drama section and for best supporting actress, Constance zimmer.

Historical drama about the youth of Queen Victoria, the longest-lived monarch in the history of the United Kingdom, second only to Elizabeth II. Starring Jenna coleman ('Doctor Who'), has a script by the British novelist Daisy goodwin that, based on the queen's personal diary, explains the true story of how an 18-year-old girl who was still sleeping with dolls became a monarch after the death of her uncle and had to learn to govern feeling judged by all public opinion, something that, especially at the beginning, it will be difficult to cope. Political, palatial and amorous intrigues, as the first season deals with her marriage to Prince Albert (Tom hughes) and his close relationship with Lord Melboure (Rufus sewell).

Aidan Turner and Eleanor Tomlinson lead the cast of this period BBC production, set in the late 18th century and based on the literary saga of Winston Mawdsley Graham. Plagued by love intrigues, spectacular landscapes of the Cornish coast (England) and family betrayals, it begins with the return home of Captain Poldark after having fought in the American War of Independence to avoid the smuggling charges against him. Upon his return, he finds his farm in ruins and his beloved engaged to his cousin.

Shiny dystopia British bill that presents us with a bleak future in which the welfare society has given its last blows to leave many citizens adrift. The dire changes hit hard at different members of the Lyon family as a disturbing and populist political (Emma thompson) is gaining weight and attracting followers among the increasingly sunken British voters.

Based on true events, this comedy with dramatic touches follows the day-to-day life of a 1930s English family led by a widowed mother of four (Keeley Hawes, 'Bodyguard ') who seeks to rebuild his life in a place completely away from the rainy and cold city of Bournemouth in which they reside: the small and heavenly Greek island of Corfu. Directed by Steve Barron, it counts on its cast with the Emmy winner Josh o'connor (Prince Charles in the third installment of 'The Crown') as the eldest son, Lawrence.

Top of the Lake

The award-winning Elisabeth moss ('Mad Men', 'The Handmaid's Tale') plays a detective who returns to her hometown of Lake Top, New Zealand, to investigate who is behind the rape of the 12-year-old daughter of a police chief. the local mafiaPeter mullan), which disappears after discovering that she is pregnant. Holly hunter ('The piano') embodies an androgynous spiritual leader of the area.

BBC crime thriller headed by actress Sarah Lancashire, a police sergeant marked by misfortune. Sister of an ex-drug addict, she is raising her grandson after the suicide of her daughter, who fathered the little fruit of rape. His relationship with his other son is completely void. The scriptwriter Sally wainwright knows how it transforms the spectacular rural valley of Yorskhire into a place marked by tragedy.

Tags: 10, bright, international, series, you can